# Updates on the public assemblies during 6-19 December 2020: Public assembly to show moral support to those charged with Section 112 case

During 6-19 December 2020 saw at least six public assemblies, less than the two previous weeks. During this time, there was no mass demonstrations with over 1,000 participants. Rather, most public assemblies were organized to show their moral support to their fellow demonstrators who have been charged at various police stations. Meanwhile, harassment against the demonstrators by charging them for violating the Penal Code’s Section 112 was on the rise.

# Gatherings to show solidarity with those charged with Section 112 case

The slew of cases per the Penal Code’s Section 112 or “lese majeste” slapped against a number of protesters has prompted gatherings to show support to the alleged offenders at police stations in various areas. During 6-19 December, such public assemblies took place four times including on 17 December at the Yannawa Police Station when the demonstrators were intentionally clad in “traditional Thai costumes” to show their solidarity with those facing Section 112 charges as a result of their wearing traditional Thai dress while participating in a public assembly in October 2020. 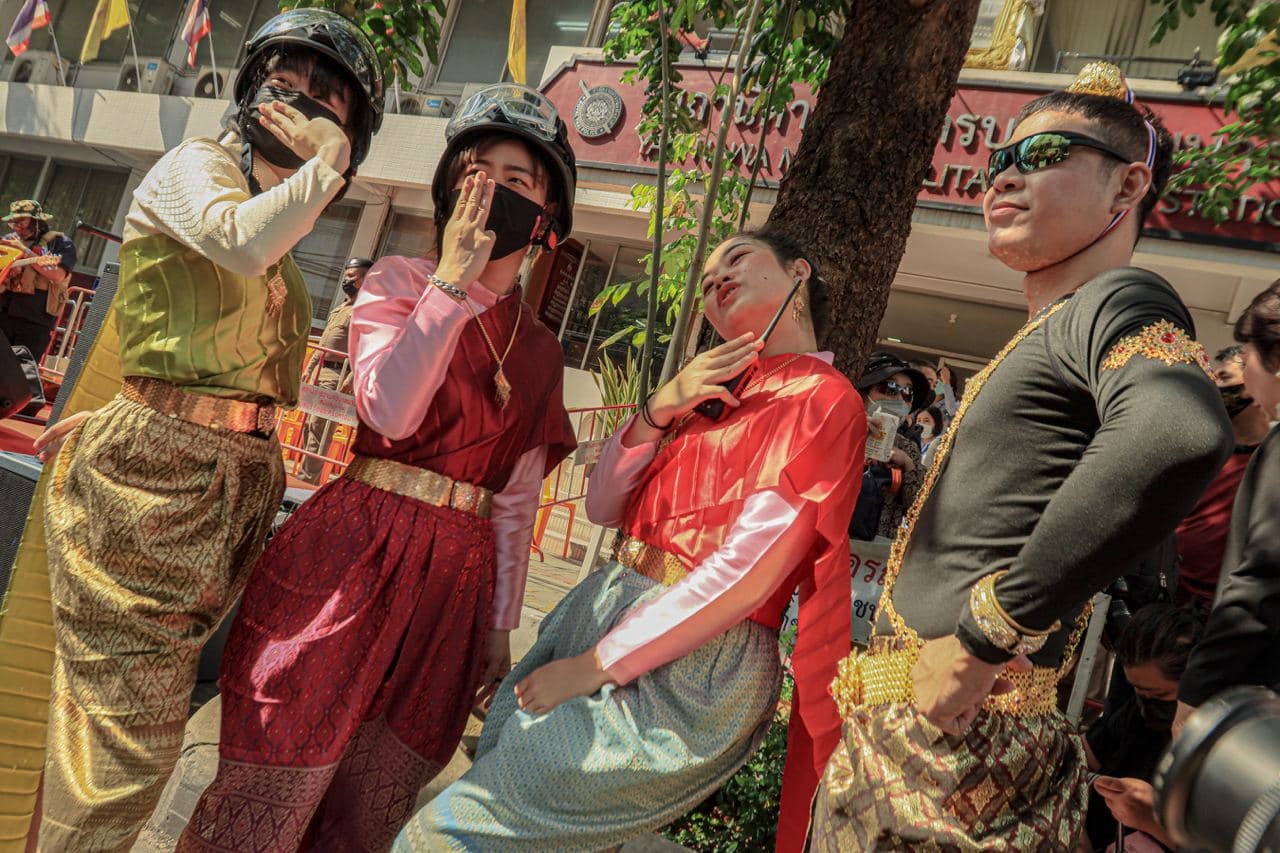 The gathering has also been prompted by attempts to press Section 112 charges and on 10 December, they were gathered and submitted a letter to the United Nations to campaign to repeal the Penal Code’s Section 112. 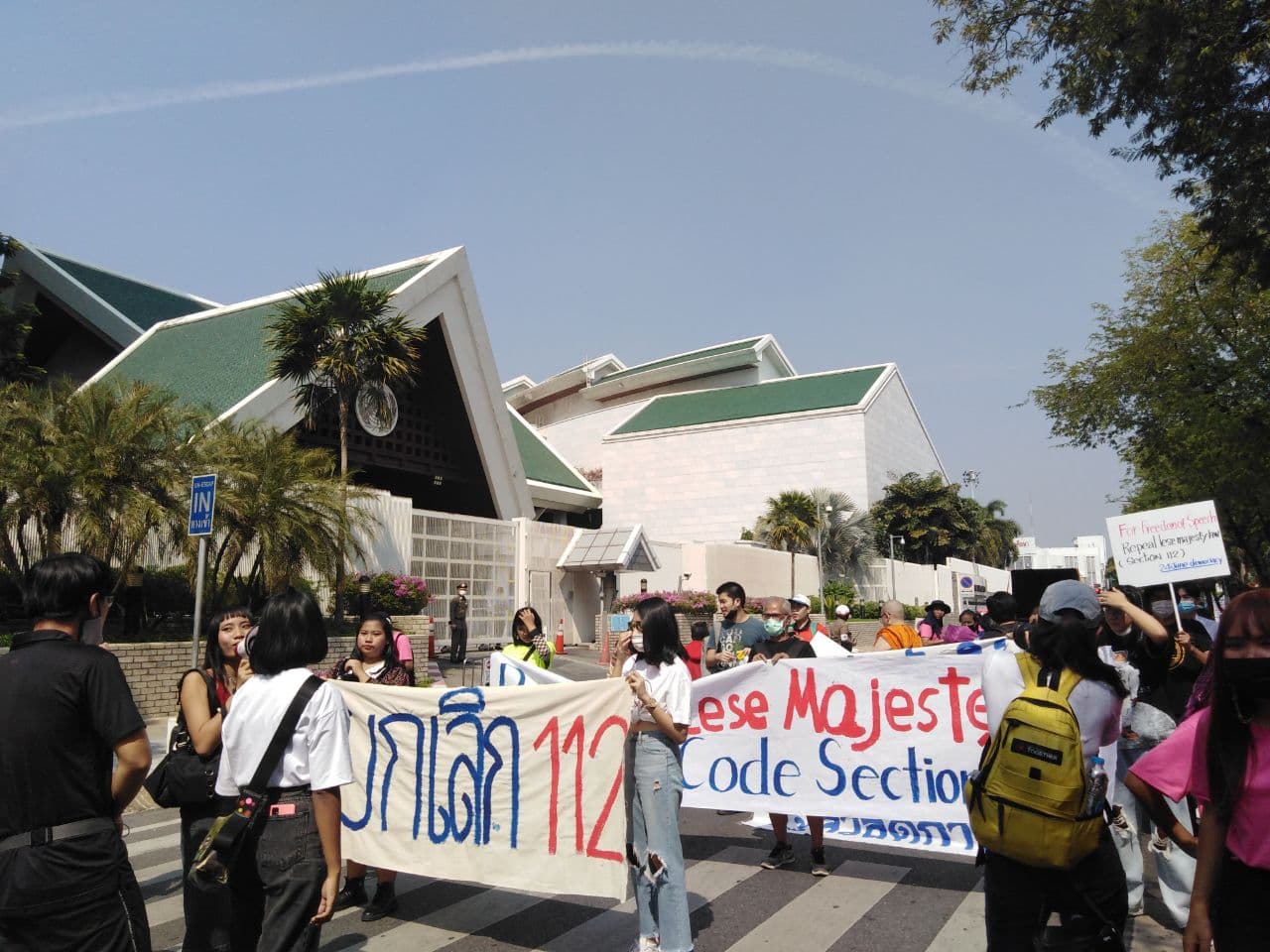 From 6-19 December 2020, at least 24 individuals have been charged for violating Section 112. Their alleged acts were mostly concerned with their speaking on stage at previous public assemblies. Most of the suspects in this case are protest leaders including Anon Nampha and Patsaravalee Tanakitvibulpon and several face multiple charges. In addition, some demonstrators and 16-year-minors have also been slapped with Section 112 charges as well.

Breakdown of the charges during 6-19 December 2020 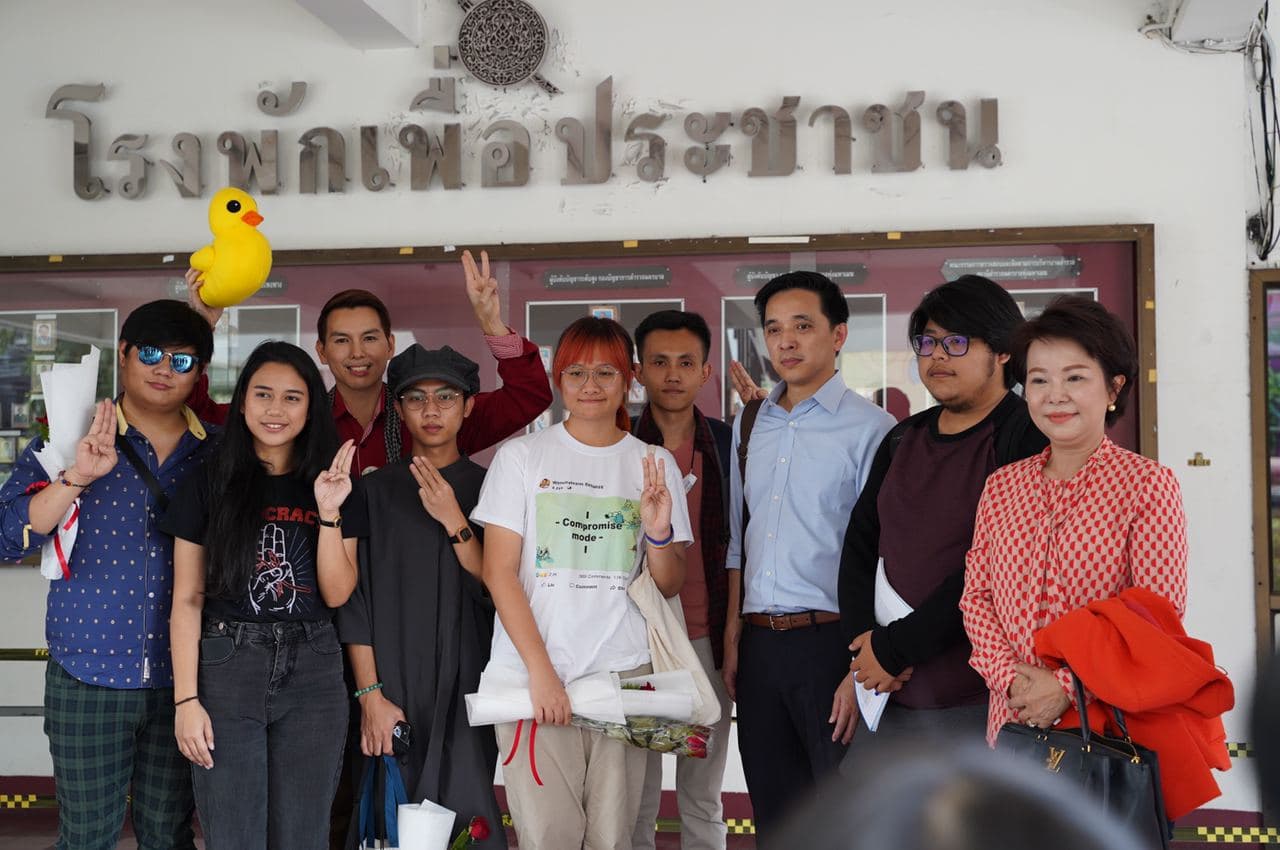 8 December 2020 at the Muang Nonthaburi Police Station, Parit Chiwarak, Panupong Chadnok and Panusaya Sithijirawattanakul heard charges stemming from their rally speeches concerning the monarchy during the demonstration #NontFolkCan’tBeatWithDictators at the Nonthaburi pier on 10 September 2020. 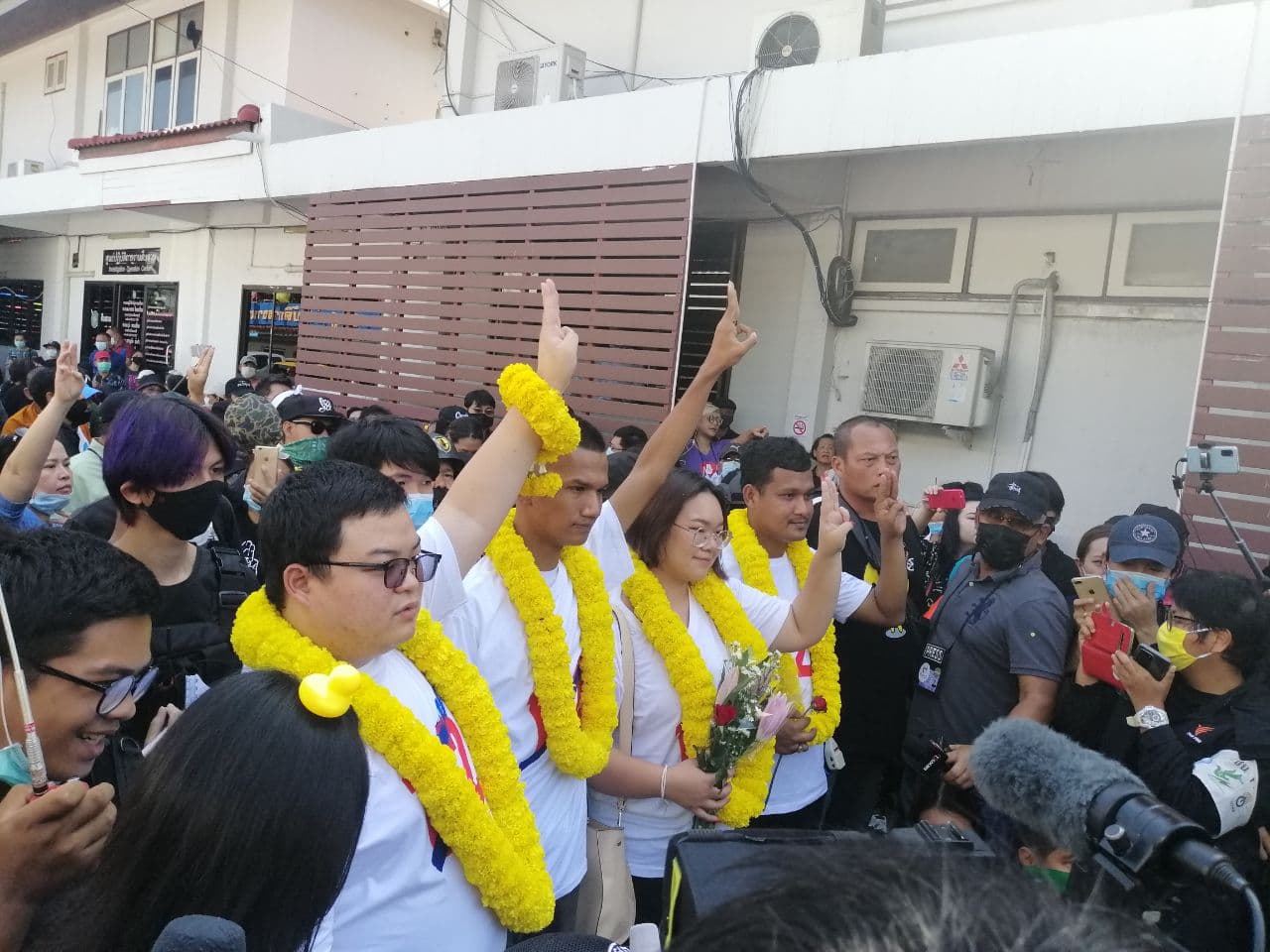 16 December 2020 at the Samranrat Police Station, Anon Nampha heard charges stemming from his speech on King Rama X at the “14 October Mob” demonstration at the Democracy Monument on 14 October 2020. 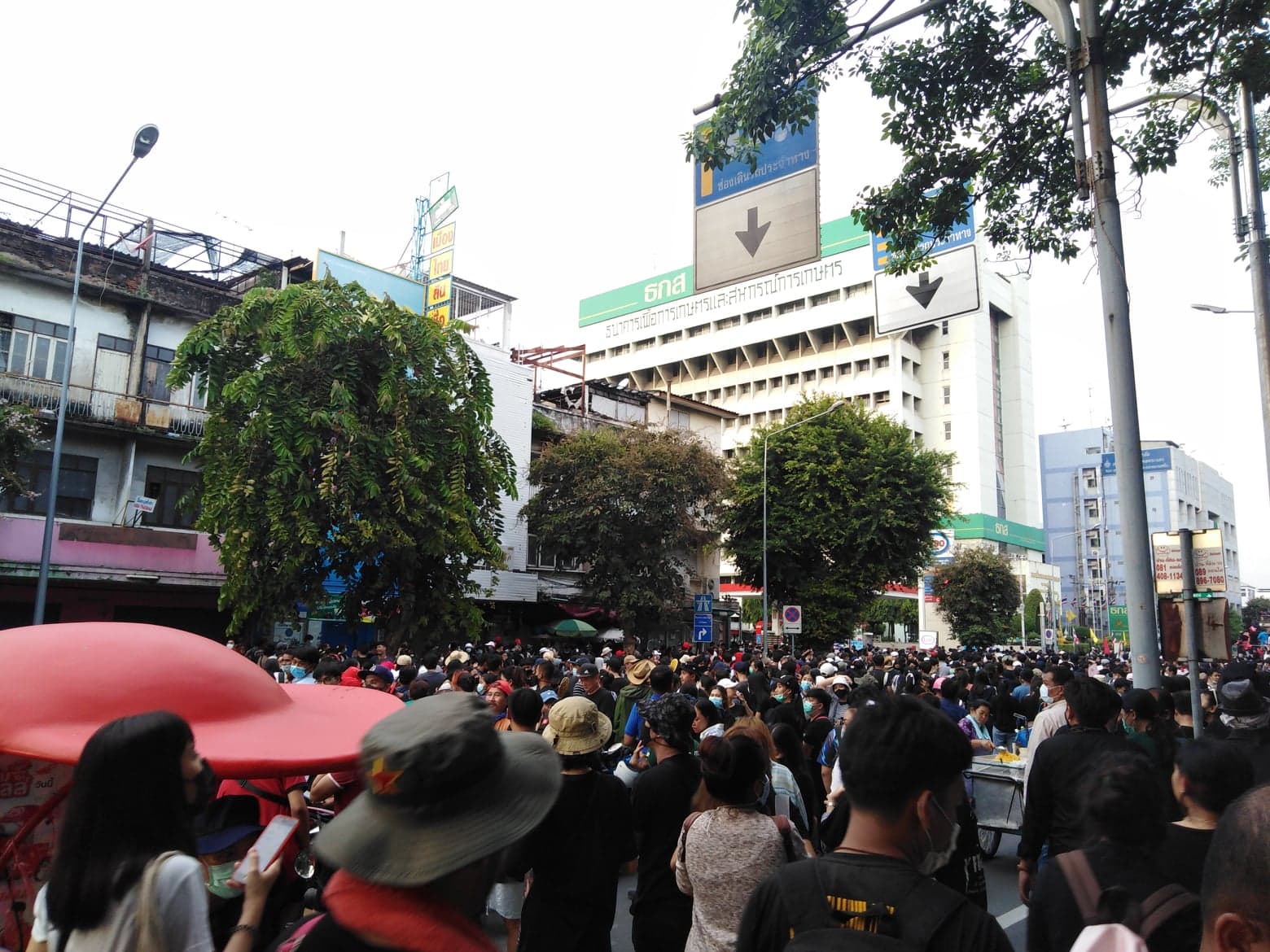 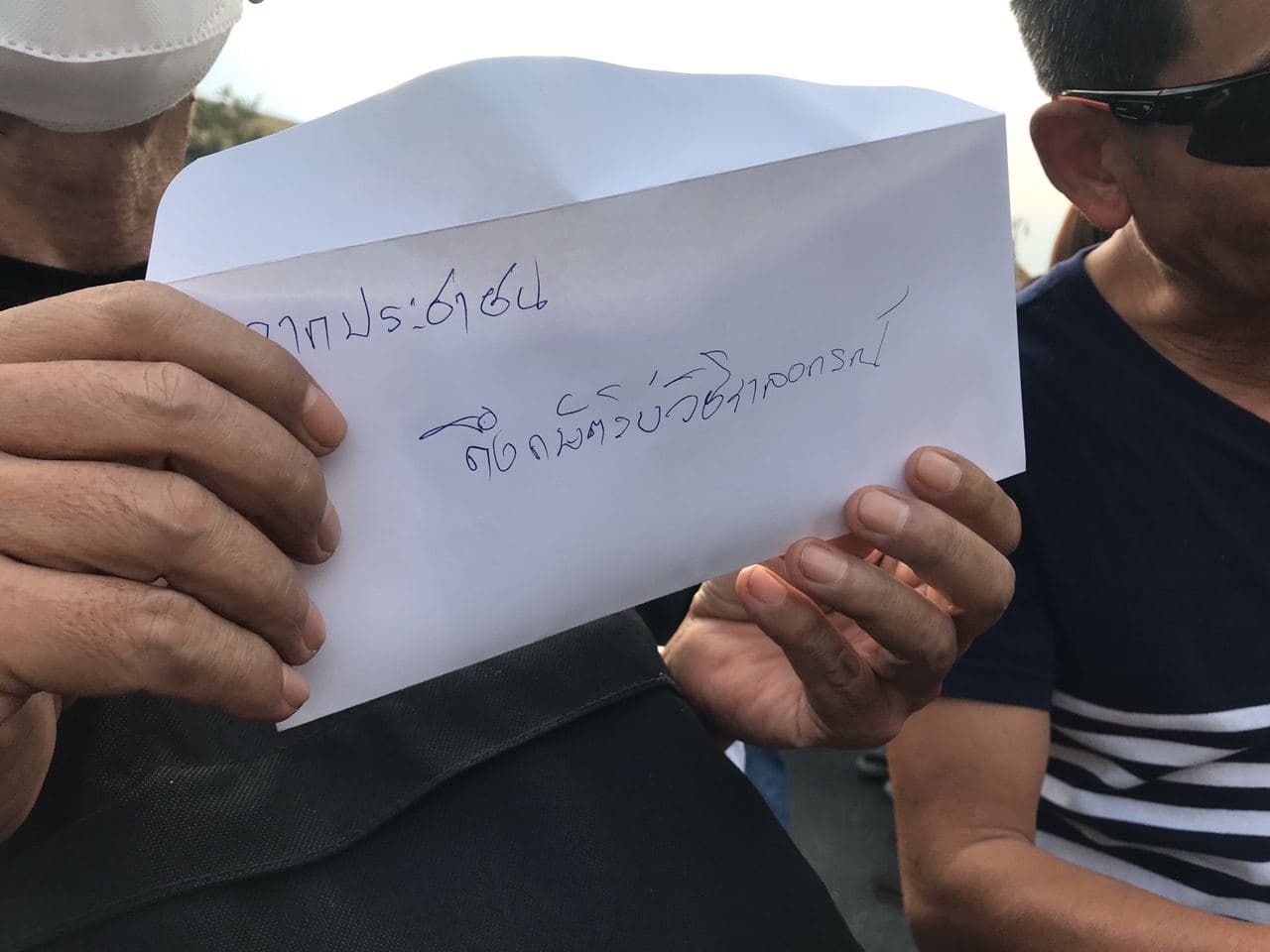 16 December 2020 at Bang Pho Police Station, Anon Nampha heard charges stemming from his speech at the #IOrderYouToStayUnderTheConstitution or #17NovMob at the Parliament in Kiak Kai on 17 November 2020. 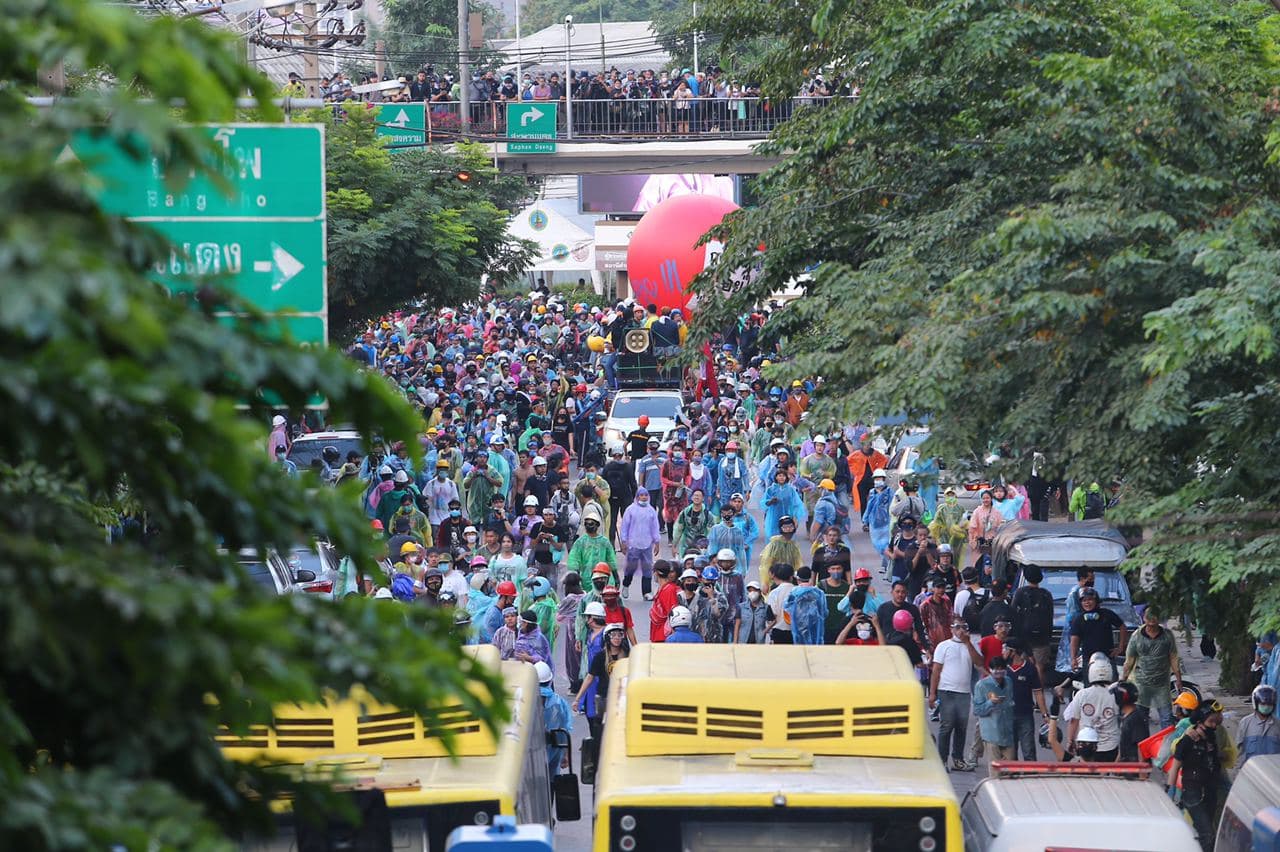 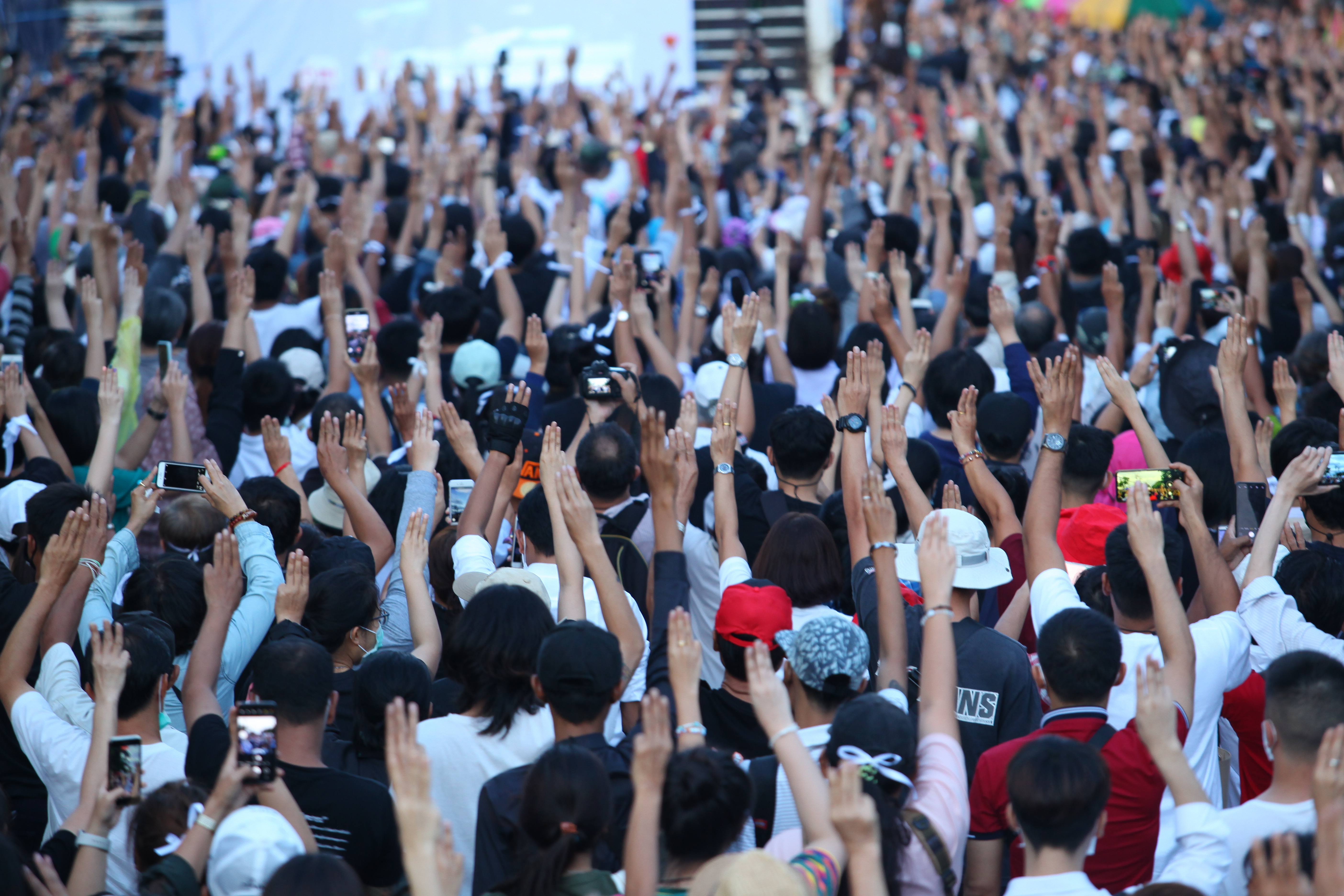 17 December 2020 at Yannawa Police Station, two suspects including Jatuphon Ueng and Saichon (pseudonym), a 16-year-minor, heard charges stemming from their wearing pink traditional Thai costumes and black crop top while referring to King Rama X on the writing on his back. Both participated in the Silom gathering and a mock fashion show on 29 October 2020. 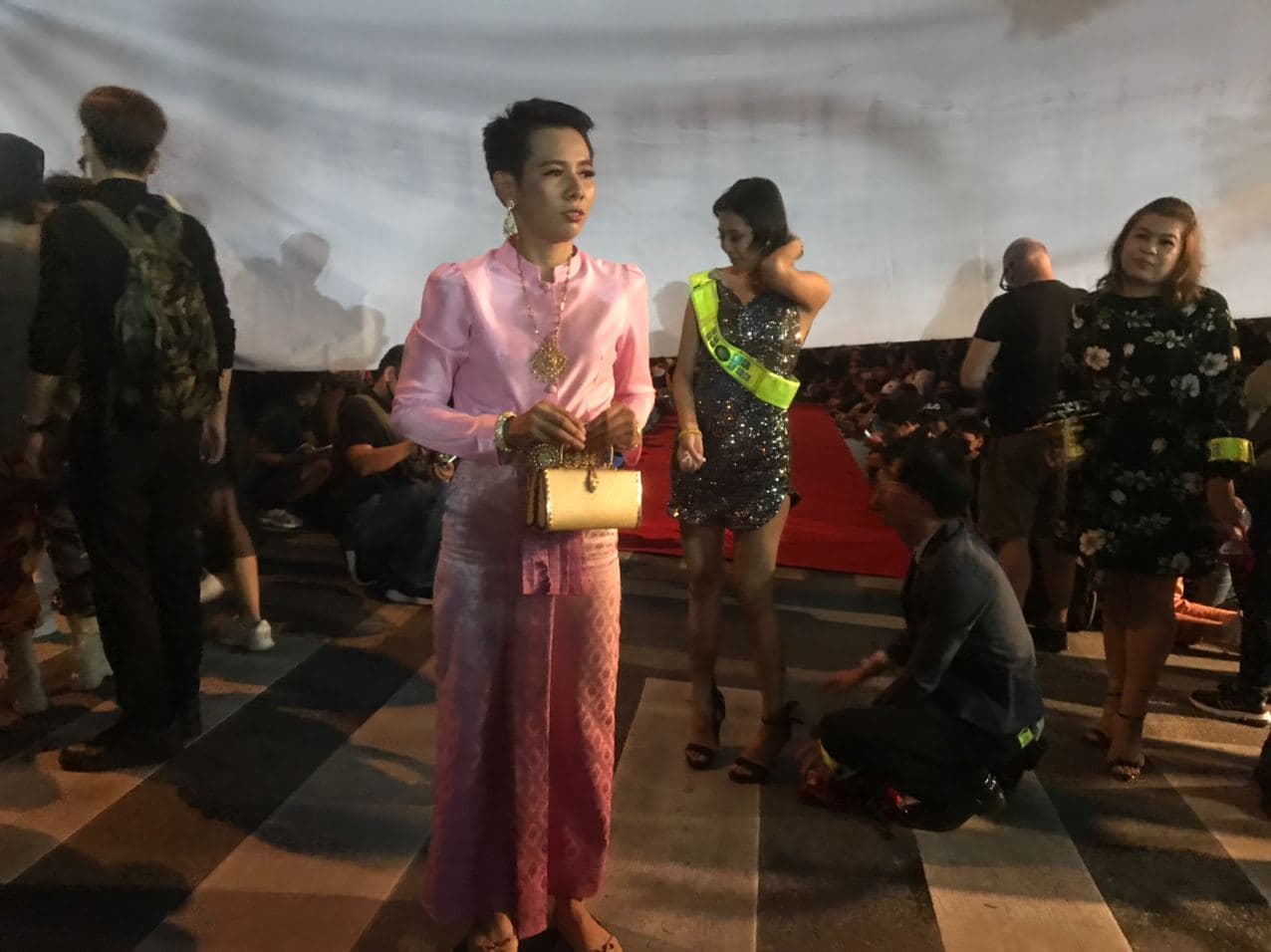 18 December 2020 at Lumphini Police Station, Sirapob Phumphuengphut, Chuakiat Saengwong, Thani Sasom and Shinawatra Chankrachang heard charges stemming from the demonstration #18NovGoRatchaprasong at the Ratchaprasong intersection and in front of the Royal Thai Police Headquarters on 18 November 2020. 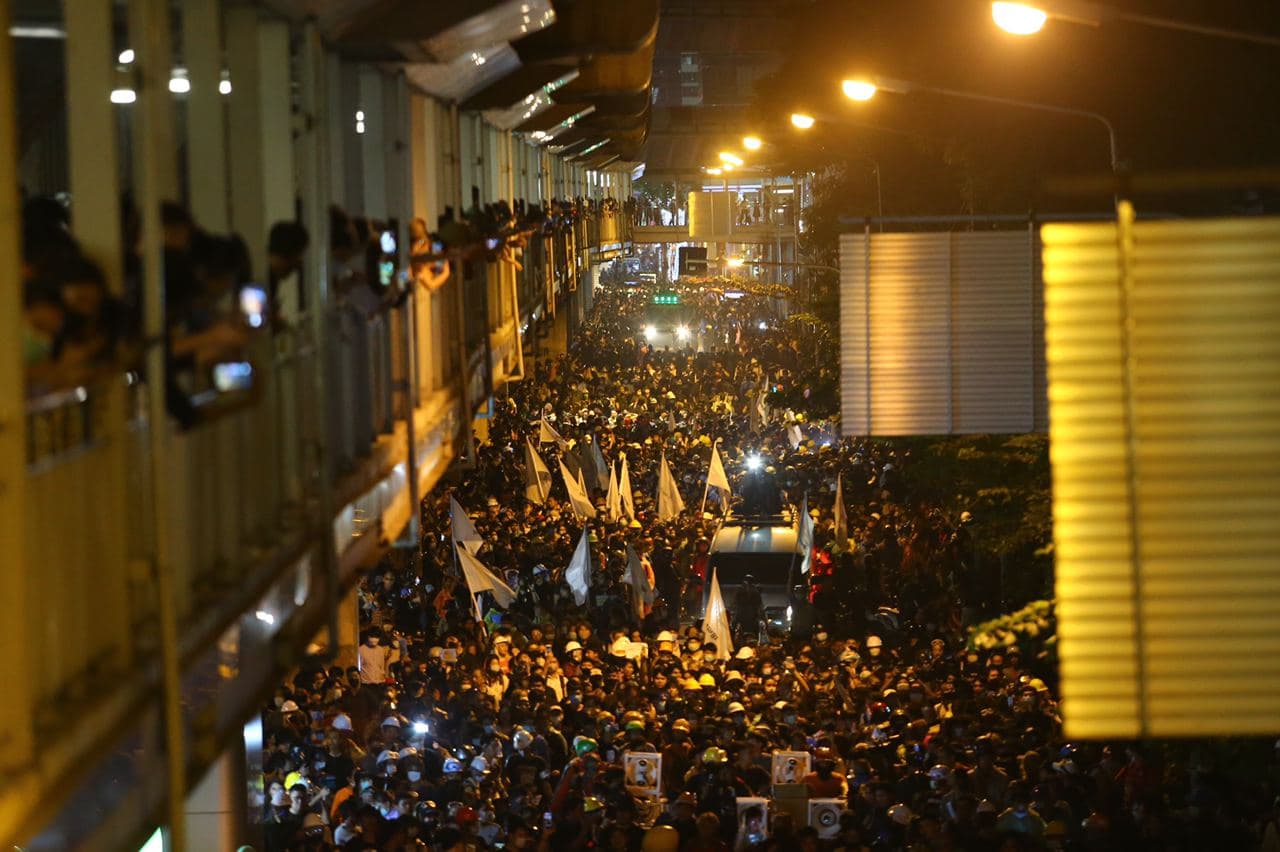 # Demonstrations to demand labor rights and rights of people with disabilities

In addition to political public assemblies, public gatherings have also been held on other issues on top of the three key demands of the Khana Ratsadorn for the rewrite of the Constitution, the removal of Gen. Prayuth Chan-ocha as Prime Minister and the reform of the monarchy, including;

On 8 December 2020, Grab drivers or partners were gathered to demand their labor rights10 in front of Thanaphum Building where Grab’s headquarters was located. The demonstrators made speeches about problems in their work and the unfair welfare system and submitted their three key demands to the company including on

all of which have to be made fair. The company’s executives did not come down to receive their demands. The demonstrators thus decided to hand the first to Suthep Oo-on, Chairperson of the House Committee on Labor.

The public assembly by people with disabilities was conducted with proper permission form the authorities. 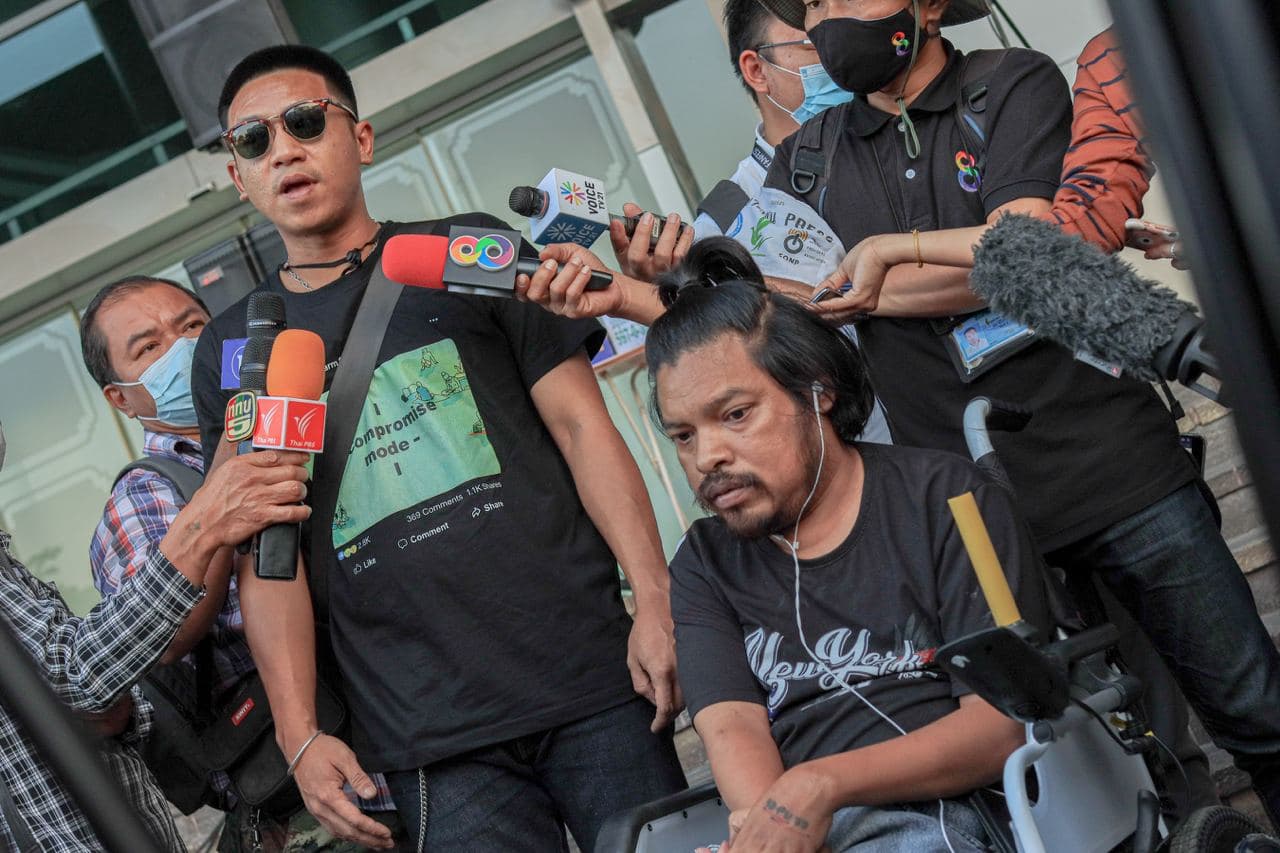 In December 2020, Their Majesties the King and the Queen were scheduled to travel to preside over the graduation ceremonies in several universities in the North and Northeast starting with Rajabhat Universities in Chiang Mai through to the Northeast including Khon Kaen University, Sarakham University and Ubonratchathani University.

The visit of His Majesty has prompted police in various areas to vigilantly monitor movement of the students, faculty members, activists and members of the public as well as attorneys allied with the Thai Lawyers for Human Rights (TLHR). According to TLHR, the police were keeping their watch on at least 30 individuals in the North and reiterated that there should be any activity during the visit to Chiang Mai of Their Majesties.

Meanwhile, the Northeast, it has been reported that students and political activists were followed by the officials and told to not organize anything during the graduation ceremony. In addition, the officials have made visits to the residence of several students causing panic among their family members.