# Updates on the public assemblies during January 2021

Into 2021, Thailand is gripped by a semi-lockdown due to the second surge of Covid-19 pandemic. It appears political assemblies have stuttered as well, similar to during the first surge last year. After a while, various groups have taken to the street again to push forward their demands on key issues and they tend to expand to cover a range of other social issues, be it the procurement of Covid-19 vaccination, relief program for the affected people, or the gatherings to show solidarity with those arrested for politically motivated charges to express their discontent toward the use of SLAPP cases to stifle freedom of expression. 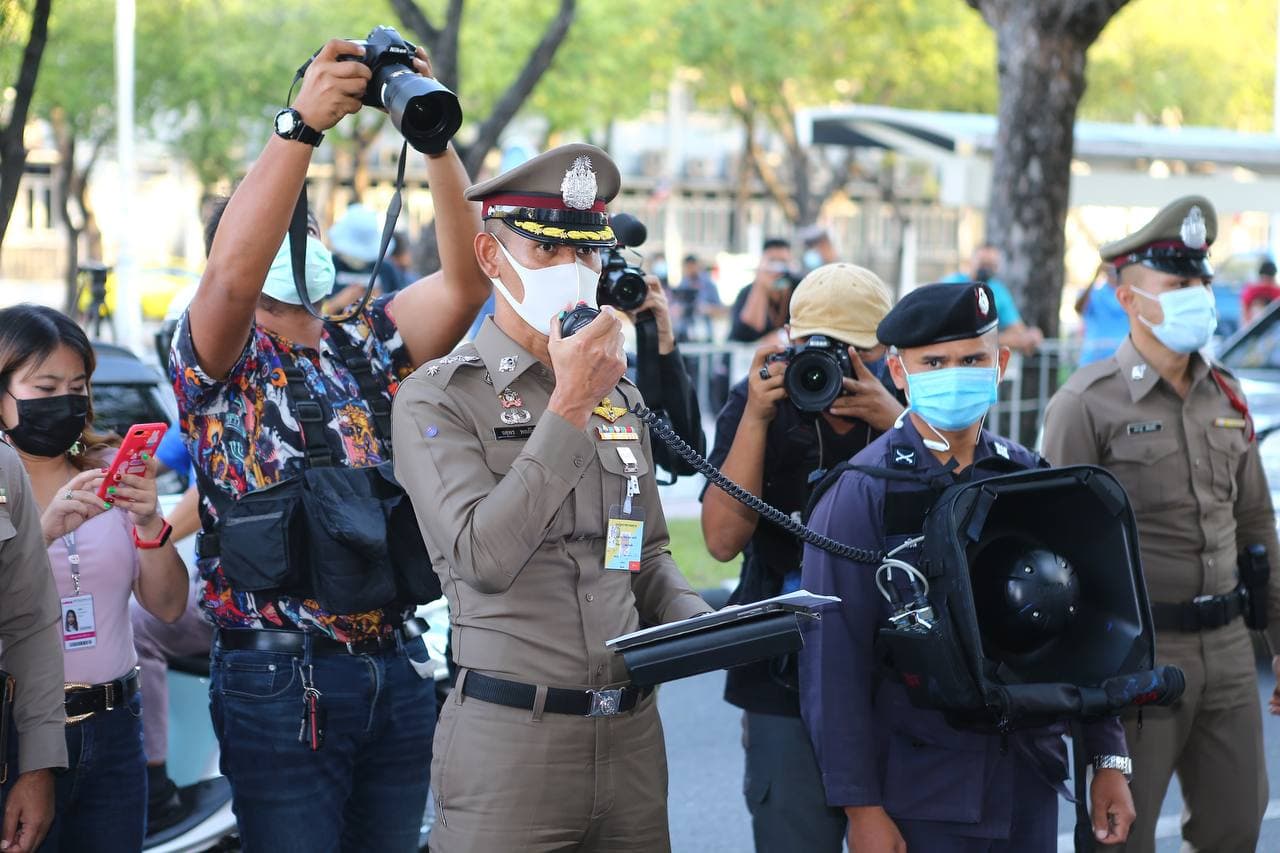 From our monitoring of public assemblies during 1-31 January 2021, there have been at least 47 gatherings countrywide including in Bangkok (35), Pathumthani and Roi-Et (4), Samut Prakan (2) (one overlapping with Bangkok since the procession started from there), Ratchaburi (1) (one overlapping with Bangkok since the procession ended in Bangkok) and Ubonratchathani, Chaiyaphum and Chonburi (1 in each province). Of the 47 public assemblies, seven have led to prosecutions. The main charges coalesced around the violations of regulations which ban public assemblies issued by virtue of the Emergency Decree and carries up to two years of imprisonment or a fine not exceeding 40,000 baht or both.

New laws that have been used to muzzle the exercise of freedom of expression include offences per the Flag Act 1979 as a result of the gathering at the Klong Luang Police Station on 15 January 2021 whereas laws that have repeatedly been used include the Act on Maintenance of the Cleanliness and Orderliness which was used twice more against the public assemblies of Bad Students on 8 January 2021 and the use of old vehicle offence during the demonstration of the United Front of Thammasat and Demonstration on 11 January 2021. 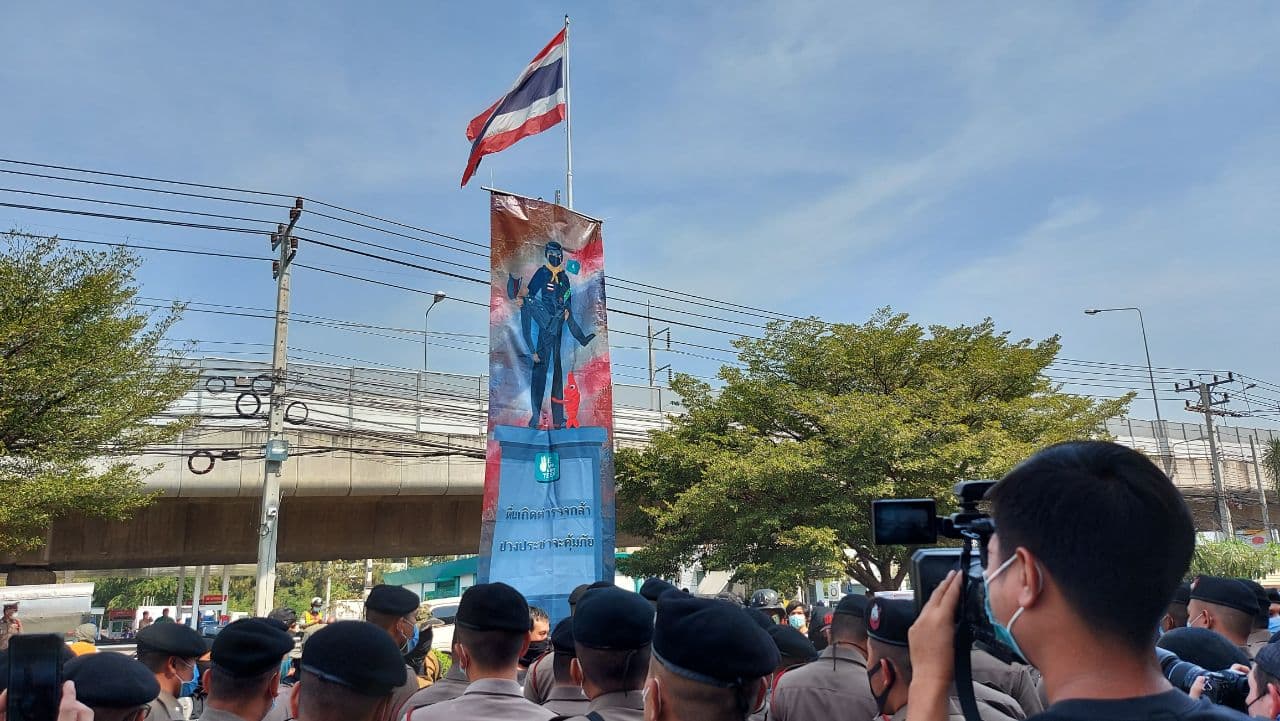 # Seven assemblies have led to prosecutions.

In January 2021, “Ratsadon”, the group responsible for mass demonstrations, announced a hiatus of “big rallies” due to the Covid-19 pandemic. The protesters have also changed their tactics to hanging banners in public places. Small-scale public assemblies still sprang up at various times. They are organized by activists from other groups since the pro-democracy activists have been quite busy this month with reporting themselves to the police and hearing charges against them, all of which are politically motivated cases stemming from their demonstrations and other causes. As a result, 15 of the 47 public assemblies have been the gathering to show their solidarity with those slapped with charges at various police stations including the gathering to show support to Patsaravalee and Pongsathon, two prominent leaders of Ratsadon at the Phahonyothin Police Station on 4 January 2021. 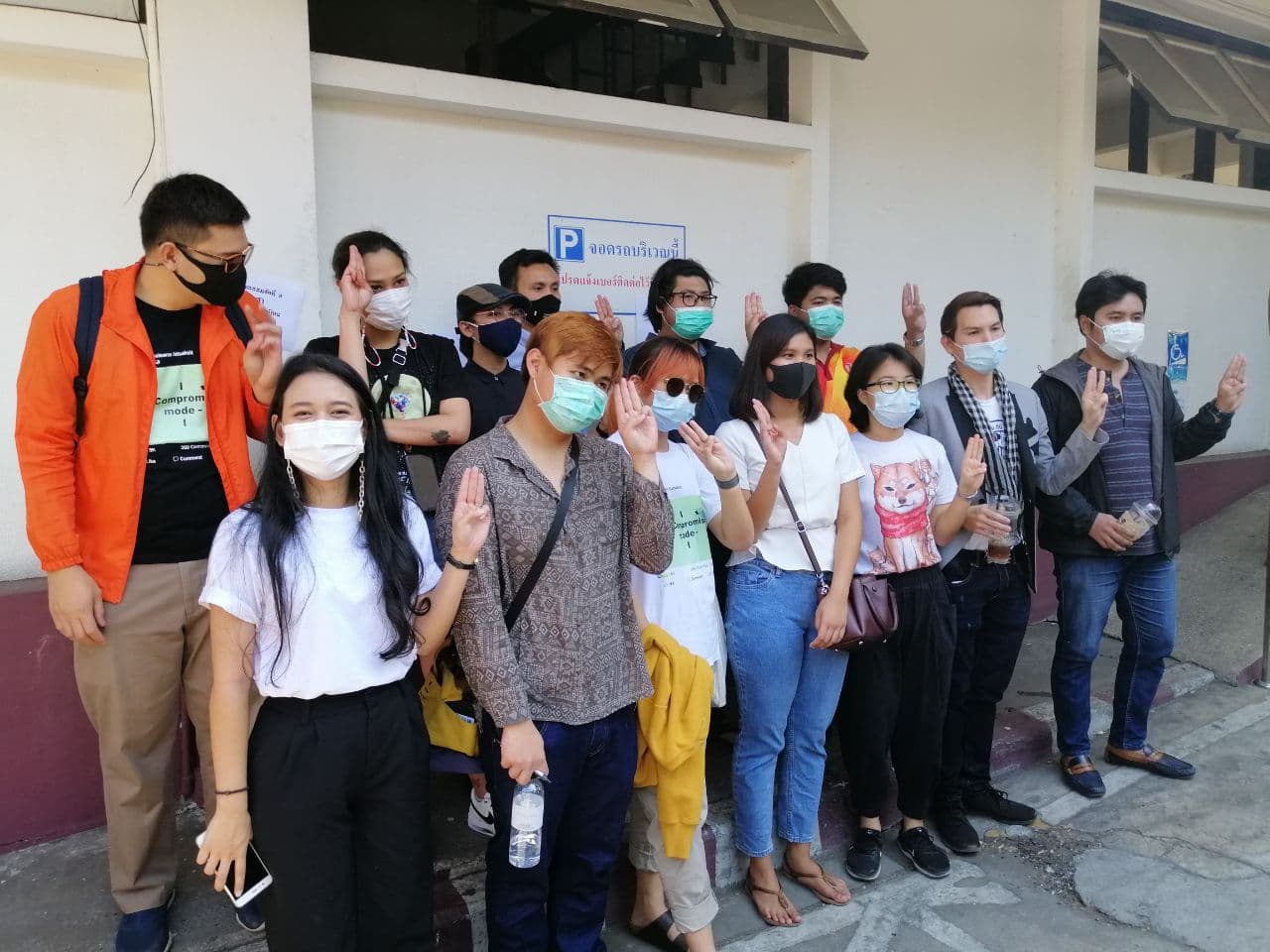 Major demands for the public assemblies in January 2021are inevitably concerned with Covid-19. 19 of the 47 gatherings were organized in response to the role of the state. In comparison, between the protests to demand Covid-19 relief support in the first round in June 2020 and the second round, protest leaders in both campaigns continue to push for the same demands. For example, the “Reclaiming Our Money, Not Begging Group” insists that the Social Security Office (SSO) must tap into the old age pension fund and offer help to the affected workers to help them cope with their immediate need. Despite their campaign for eight months, their demand has not been met.

Another group is composed of labour networks from various neighborhoods including the textile labour unions and the labour unions in Rangsit and adjacent area. They have been calling on the government to provide workers with financial relief “universally”. In January 2021, they have again come out to reiterate their demand for universal relief fund without requiring people to prove their poverty before having access to the fund. In this campaign, they are joined by new supporters including the Union of Designers, and artists and youth affected by the economic crunch. 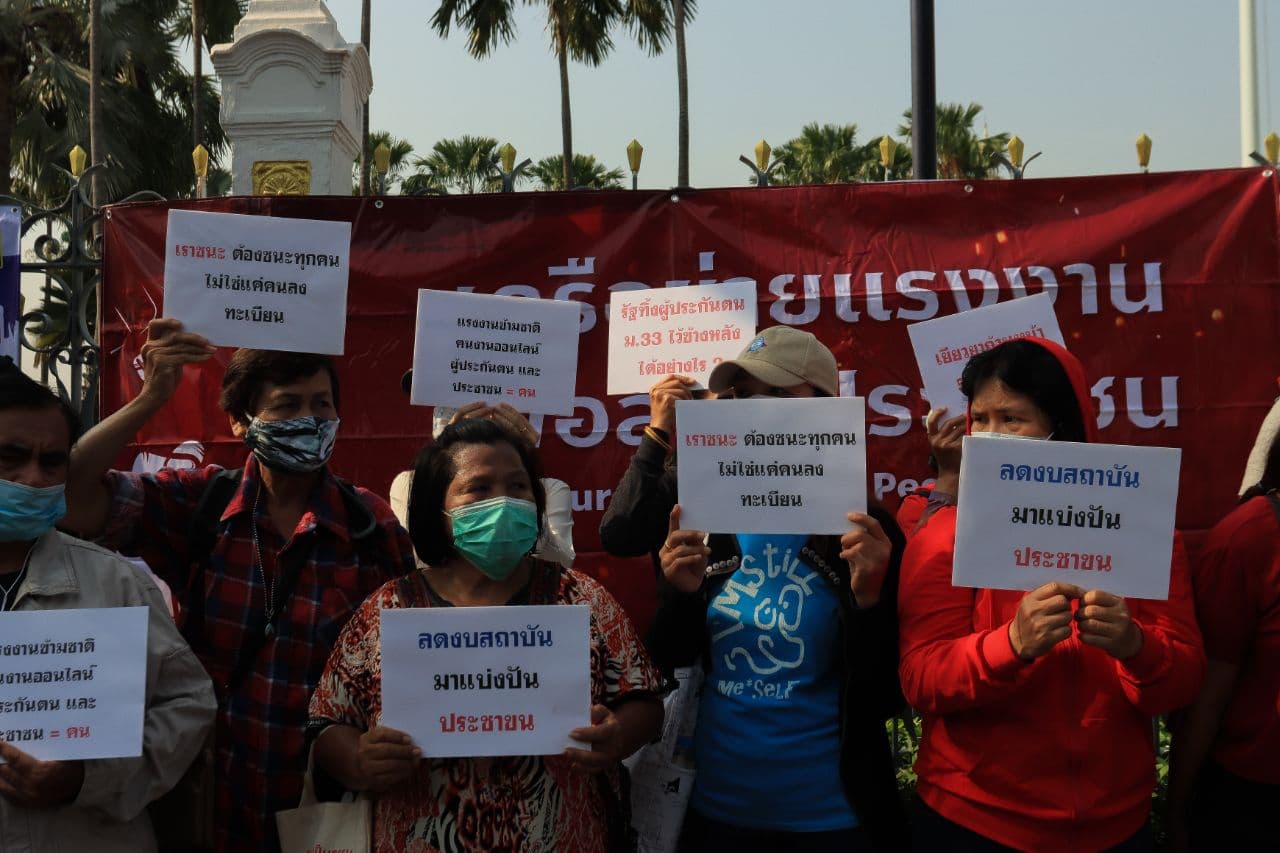 The demand for monarchical reform has been linked with the Covid-19 context. People questions the transfer of ownership of public funds to the King and how taxpayers' money has been unjustifiably used to serve the interest of the monarchy. The issue failed to gain currency in the past. But now, given the sheer impact from the second surge of Covid-19, the issue of royal funds has become more prominent. Labour networks have demanded a slash in royal funds and defense budget and use it as relief fund for the public.

Even though the Ratsadon announced they would refrain from organizing a big rally for now, but given the grave impact on society, they have decided to call for the first demonstration of the year on 22 January 2021at the Ministry of Finance to demand the government offer universal financial relief. The Ratsadon demonstration was led by Panupong “Mike” Jadnok and labour networks. Panupong has been appearing prominently in rallies by the labour networks. Previously in June 2020, he joined the labour movements to demand the revocation of the Emergency Decree and the 5,000-baht-relief-fund for everyone, although their demands were not met. 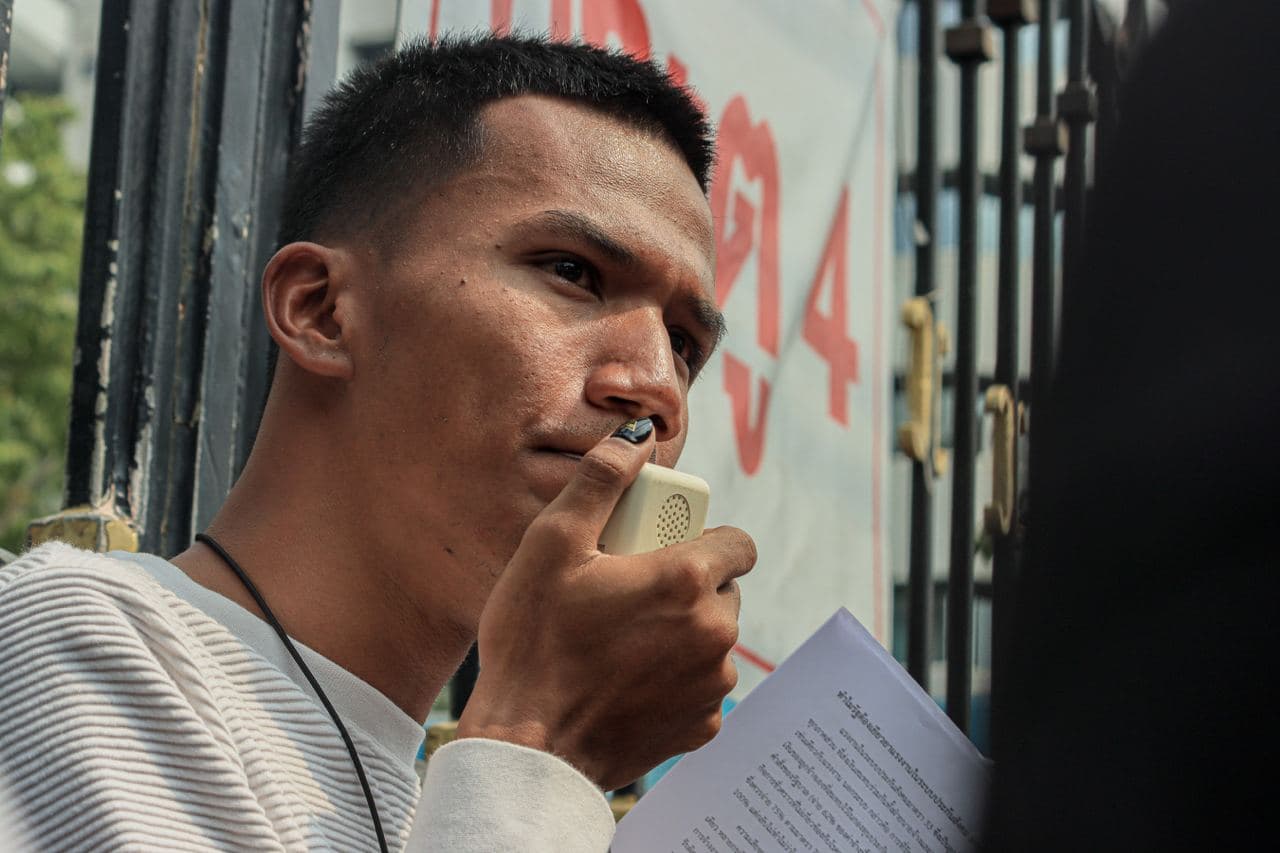 In addition, the vaccine procurement has come to the fore. Parit “Penguin” Chiwarak questions the delay and a lack of transparency regarding the acquisition of Covid vaccine which is related to the Siam Bioscience Co., 100% owned by His Majesty the King. Such situation has made issues used to be espoused on stage become something concretely relevant to the livelihood of the people with the Covid-19 as a catalyst. 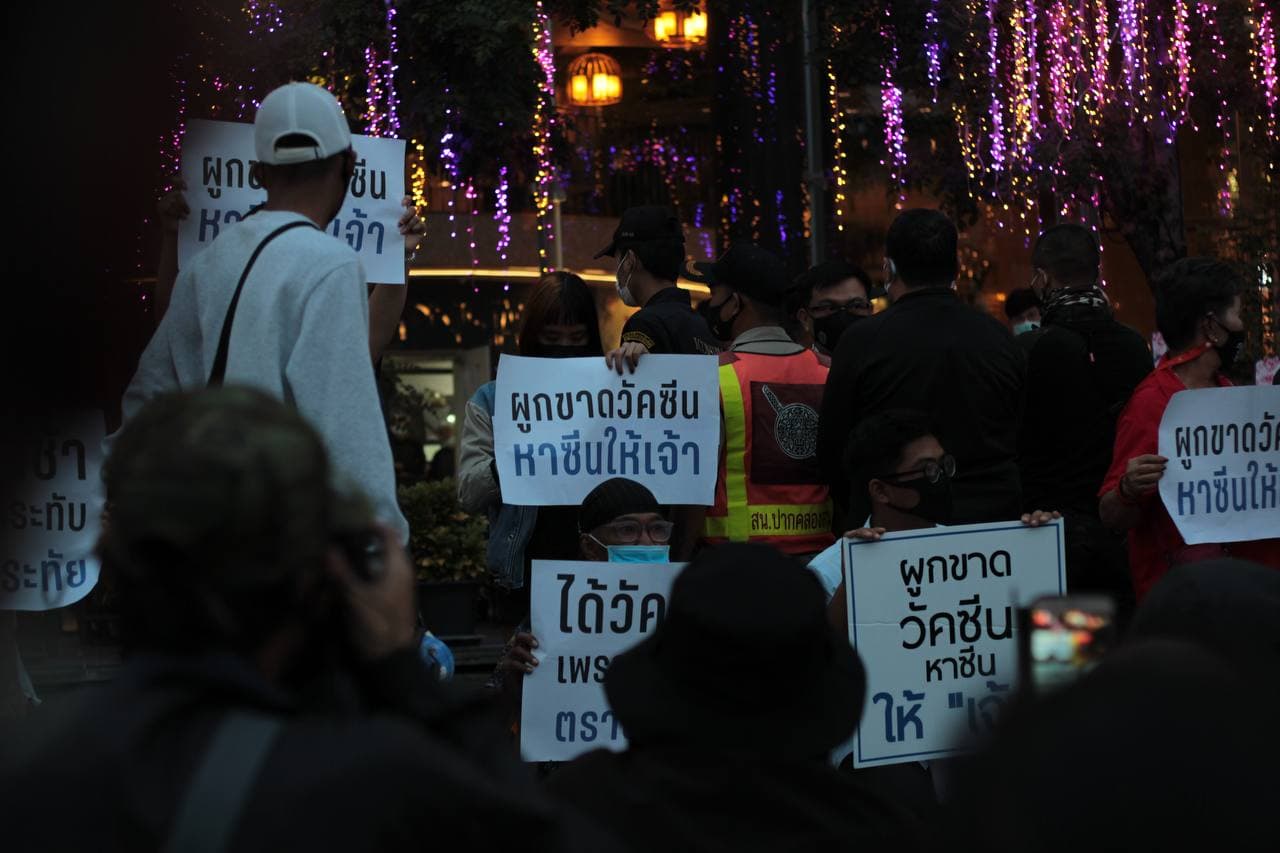 Despite the use of force to crack down on public assemblies in October 2020, the police have failed to suppress or quell public assemblies. On the contrary, such gathering tend to expand and spread extensively. This has prompted the state to change their tactic to let them complete their demonstrations and to charge them later. The use of force to crack down on demonstrations continues unabated, however. Three of them happened with at least three gatherings by We Volunteer including the demonstration in front of the Parliament on 17 November 2020, the removal of barbed wire at Urupong on 8 December 2020 and the #ShrimpRoastingMob to help farmers at Sanam Luang on 31 December 2020.

January 2021 saw at least five forcible dispersal of public assemblies. The first two were the suppression of the gathering by the Reclaiming Our Money, Not Begging Group. Their activities involved a few individuals led by Boon Arayaphon and his friends. Sometimes, it was a solo protest by Boon himself on 4 and 5 January 2021. Boon and his colleagues were thus held in custody by the police from Dusit Police Station. By having the protest leaders under arrest, the gathering would disperse themselves.

The police let Boon and his friends to camp out for several days and nights in front of the Government House amid a series of negotiation. On 4 January 2021, they decided to charge and put Boon and his other friend, the two of them, under arrest and cited them for obstructing public place, a finable offence. After hearing charges, he returned to his camp base and continue his protest. Then, he was put under arrest again and now charged for violating the Emergency Decree which carried a heavier punishment. 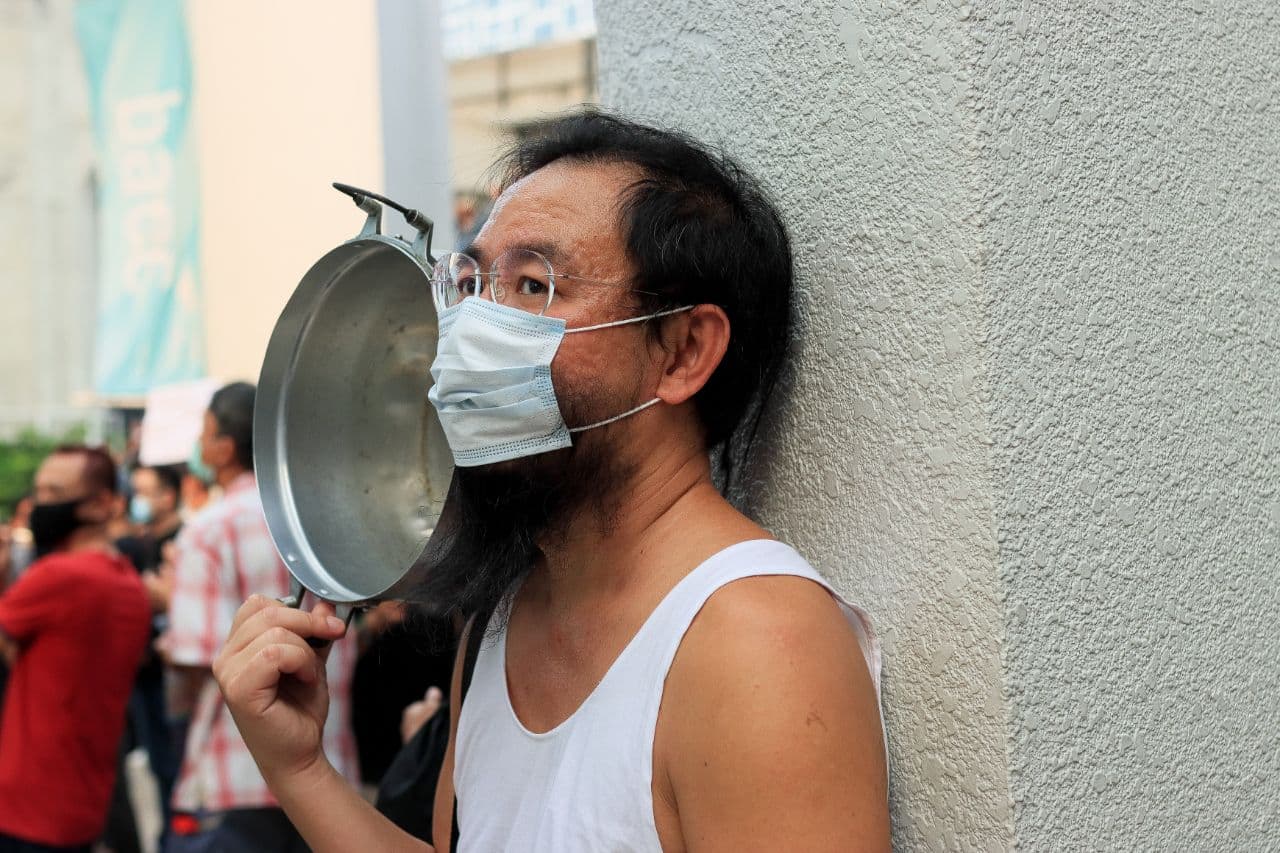 The use of more violent dispersal has been triggered by the public assembly on 14 January 2021 as the United Front of Thammasat and Demonstration declared its intent to gather to show their solidarity with Chayaphon “Dav” Danothai who was supposed to turn himself in at the Klong Luang Police Station. It was apparent that the police had applied with the court for arrest warrant for a wrong person. The Thanyaburi Provincial Court has issued warrant for Chayaphon as coconspirator with Sirichai “Hugo” Nathueng on an offence against Section 112. Both were alleged to have spray-painted portraits of the royal family and the sign of the university. But on the date the crime allegedly took place, Chayaphon was still staying in Songkhla. During their gathering at the police station, the protesters brought there a “goat” to mock the police for this scapegoating tactic. They have a red banner bearing the word “112” hung around the goat. After finishing the charge hearing, the protesters have hoisted the red banner with the word “112” on the pole, replacing the national flag, in front of the police station.

On 16 January 2021, Pol Gen Suwat Jangyodsuk, Commissioner General of the Royal Thai Police, in a press conference, signaled that he gave “green light” to the use of force to suppress demonstrations as a result of the hoisting of the “112 red flag” which the authorities believe to have been carried out by the We Volunteer. News from the press conference circulated around the same time the “Free Guards” announced their intent to organize an activity at the Victory Monument’s Payathai traffic island. While they were laying down a piece of 112-meter-long-fabric and with few people attending the event, the hundreds of plainclothes police have charged in to arrest and seize the fabric citing the need to contain Covid-19. Two individuals were held in custody and a few others have been later summoned.

The protesters then moved on to demonstrate at the Payathai Police Station to demand the release of their two friends. The police gave them an ultimatum that if they did not disband immediately, they would be surrounded by forces. Then, hundreds of riot police officers were deployed and formed a circle around the protesters. As a result, the protesters had to retreat, but not surrender. Later that afternoon, they held another demonstration at Sam Yan and again the police mobilized hundreds of officers to lay siege on them and put them under arrest. From our observation, on that day, at least four individuals were nabbed including a news editor from TPBS who was later released.

The use of force to disperse three small-scale gatherings in one day with no apparent reason and without compliance to the procedural requirement stipulated in the Public Assembly Act is indicative of a new approach of the police which appears more heavy-handed and does not allow a gathering to happen at all, particularly the ones about Section 112 and issues around the monarchy. Security has been beefed up to monitor “flag poles” in front of police stations whenever there is any public gathering there.

The use of force by the police to “draw the borderline” around freedom of expression in January 2021 is an act unjustified by any law apart from citing the second surge of Covid-19. It constitutes a blatantly abuse of the law. And when the pandemic eventually eases up and the containment measures are less prevalent, such line drawn by the police will certainly face fierce contestation from the public. 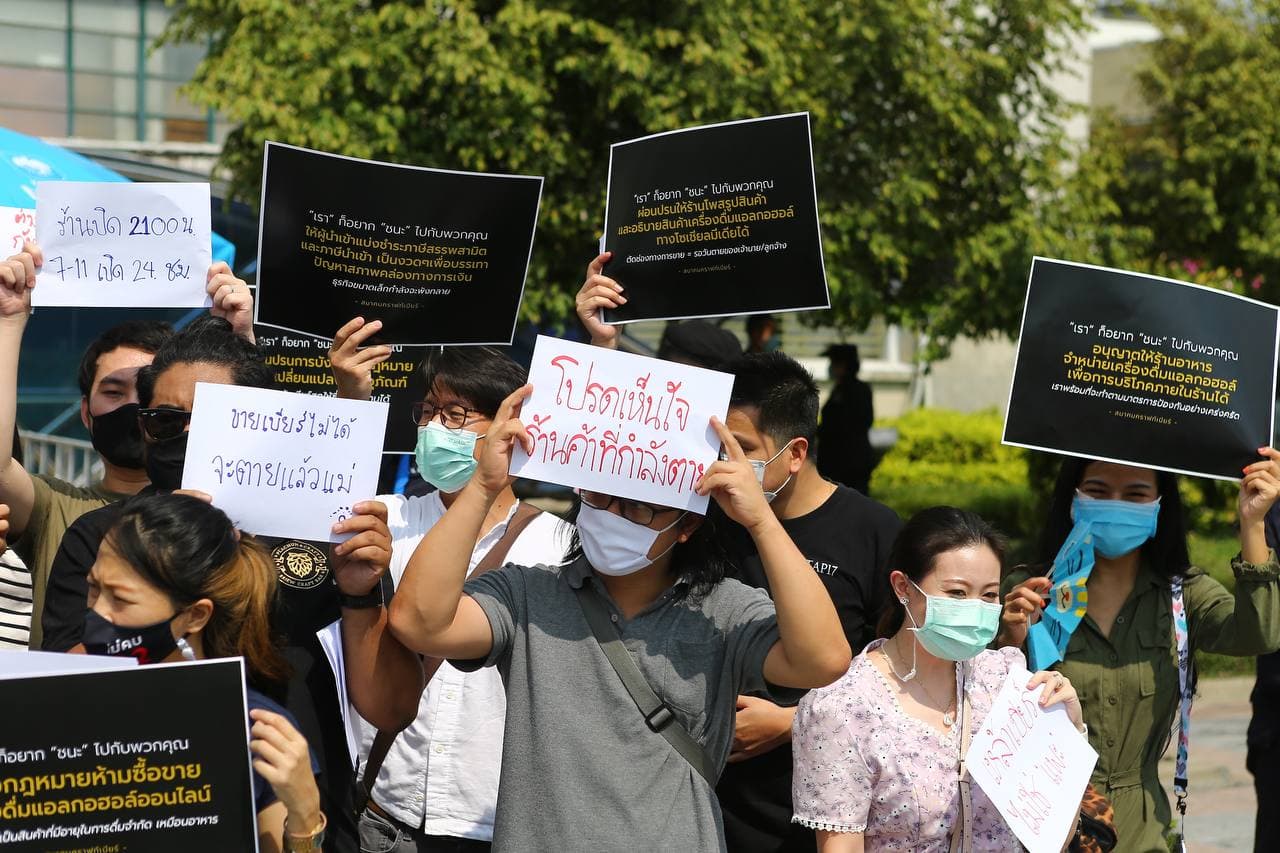