# An Overview of public assemblies in April 2021 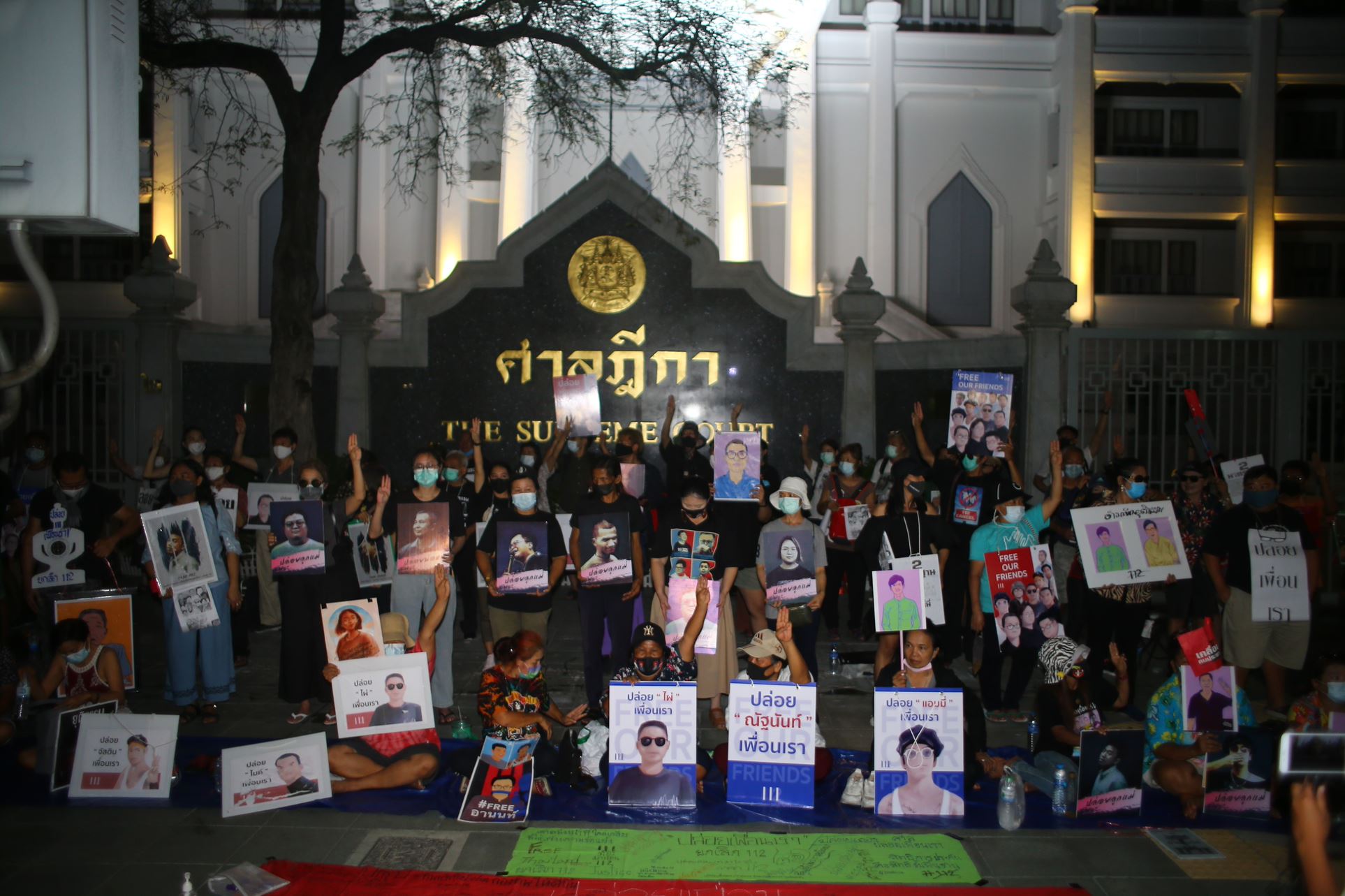 #StandStopImprisonment event on 13 April 2021 in front of Supreme Court.

April 2021 is marked by a new surge of Covid-19 pandemic, the third of its kind in Thailand and it has impeded attempts to hold a mass demonstration. Nevertheless, as the political prosecutions have been in full swing, political actions have persisted through the action #StandStopImprisonment to demand a release of political prisoners. It should be noted that a slew of legal cases against people exercising their freedom of expression have been swiftly prosecuted in the past month.

According to the observation and documentation of Amnesty International Thailand and ILAW via Mob Data project in March 2021, it can be summarized that;

- At least 180 events related to the exercising of freedom of expression and assembly have taken place, double of the figure in March. Legal actions have been taken at least against 2 of such public assemblies in April.

-Since the first demonstration in July 2020 until April 2021, at least 635 individuals have been prosecuted in 301 cases as a result of their involvement with political assemblies and expressing their political opinions.

- April saw an increase in the number of individuals slapped with Section 112 charge, at least 6 individuals in 7 cases. Most cases have been reported to the police by ordinary persons. According to TLHR, at least found individuals have been charged as a result of the reports made to the Bang Kaew Police Station.

- Between 2020– 2021, 29 individuals have been incarcerated in political cases , Some are got bailed out, 17 of whom for being indicted on Section 112. 11 persons were granted bail in April-Early May including Core Member of Ratsdon; Patiwat Saraiyaem, Somyot Pruksakasemsuk, Jatupat Boonpattararaksa, and Panusaya Sithijirawattanakul, In total, 18 persons are being detained pretrial (as of 11 May 2021). 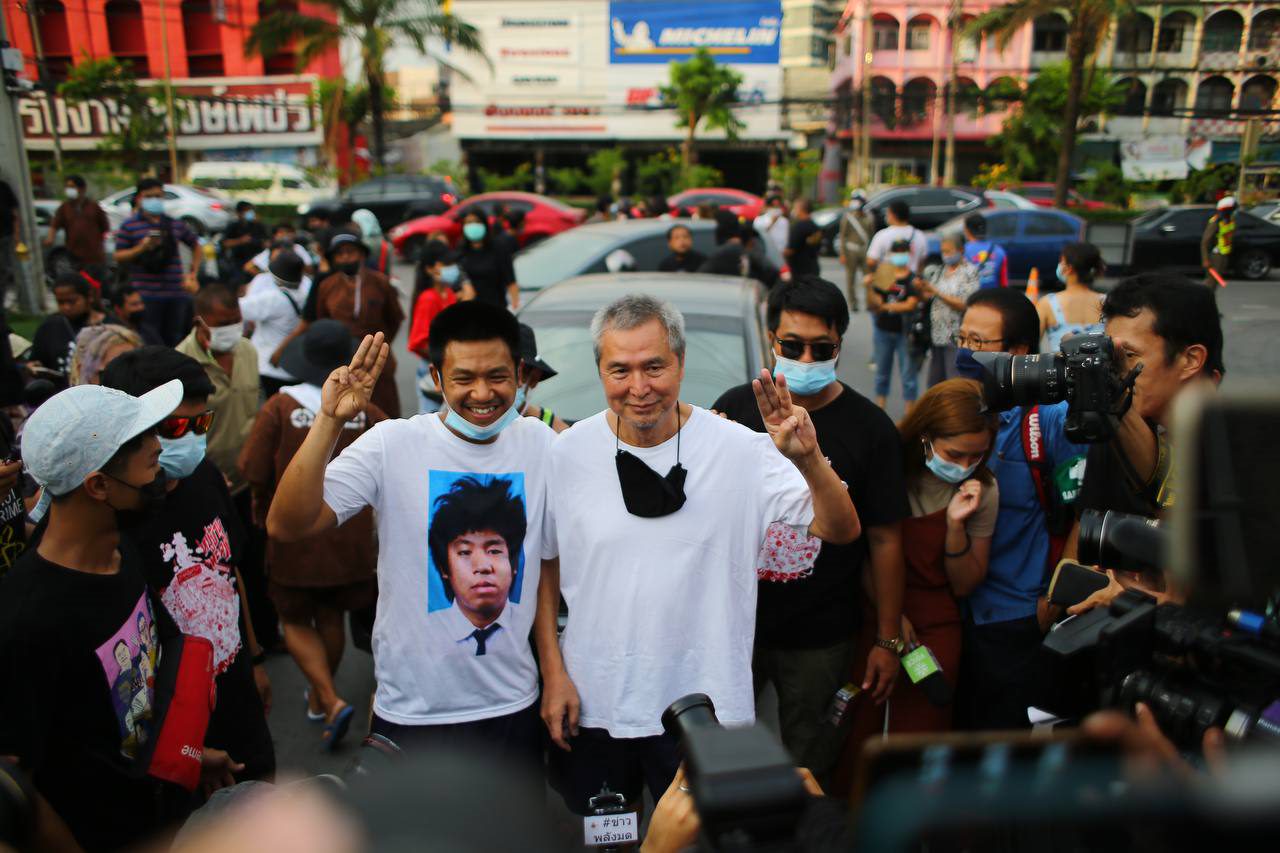 - At least 36 individuals have been charged for exercising their freedom of expression and assembly in April. They have been summoned by the police for participating for violating the Emergency Decree and the Communicable Disease Act and Refusing to comply with order of the disease control officials. 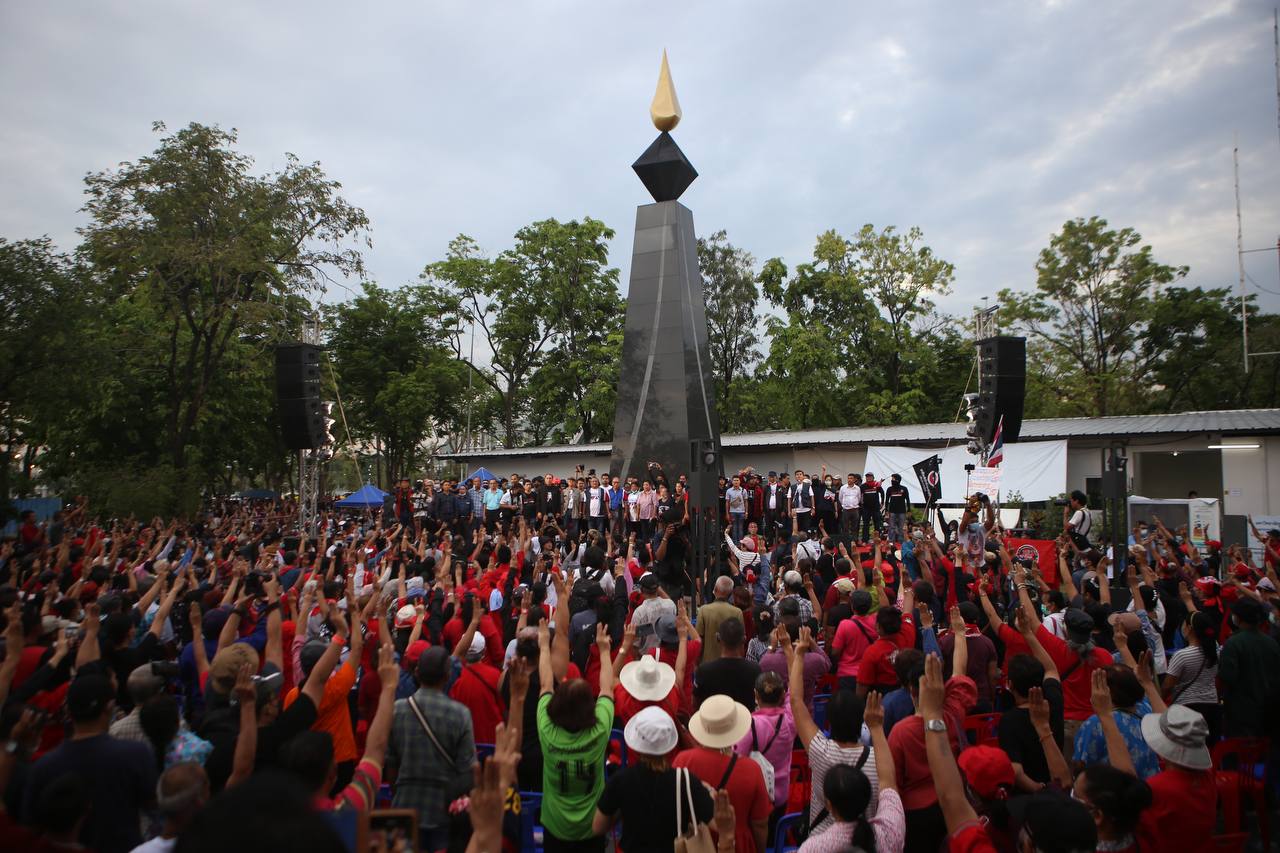 Public Assembly on 4 April 2021 "Thais Tolerate It No More, Thais Standing United for Thailand” demonstrations led by Jatuporn Prompan. There is the report on at least 32 people are charged with Emergency Decree and the Communicable Disease Act.

# The trend of “contempt of court” cases from exercising freedom of expression has been increasing. 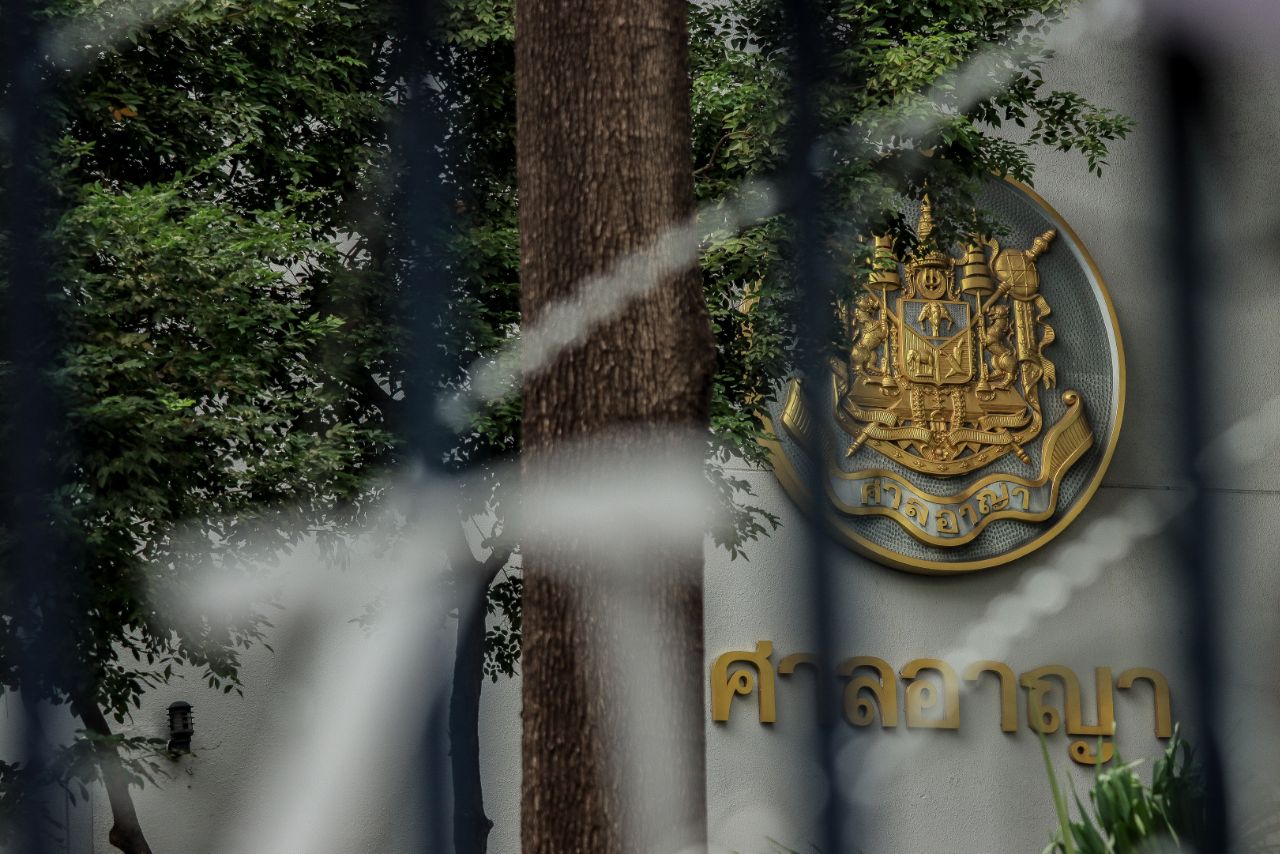 Razor Barbed Wire has been set in front of the Criminal Court since there is people gathering almost every day calling for the right to bail.

In the wake of the indictment and remand in custody of core members of the Khana Ratsadorn and other individuals and the hunger strike staged by some core members to demand their right to bail including;

Panusaya ‘Rung’ Sittijirawattanakul, on hunger strike, since 30 March 2021, incarcerated since 6 March 2021. Later, she was granted the bail on 6 May 2021 with got bailed out on 23 April 2021 with extra conditions not criticizing the monarchy and she vowed to wear an EM bracelet device at all times.

Given such situation, even though the Covid-19 pandemic-19 has surged again, people continue to express their outrage and demand the right to bail through the “Stand Stop Imprisonment” initiated by Resistant Citizen since 22 March 2021 in front of the Supreme Court. More people have joined and organized similar activities in other places in front of local courts in different provinces. Despite the surge of Covid-19 in early April, the activity is still organized in different provinces and the participants keep their distancing from each other and a limit is put on to cap the number of participants, particularly in front of the Supreme Court in order to avoid a breach of the BMA’s Notification. 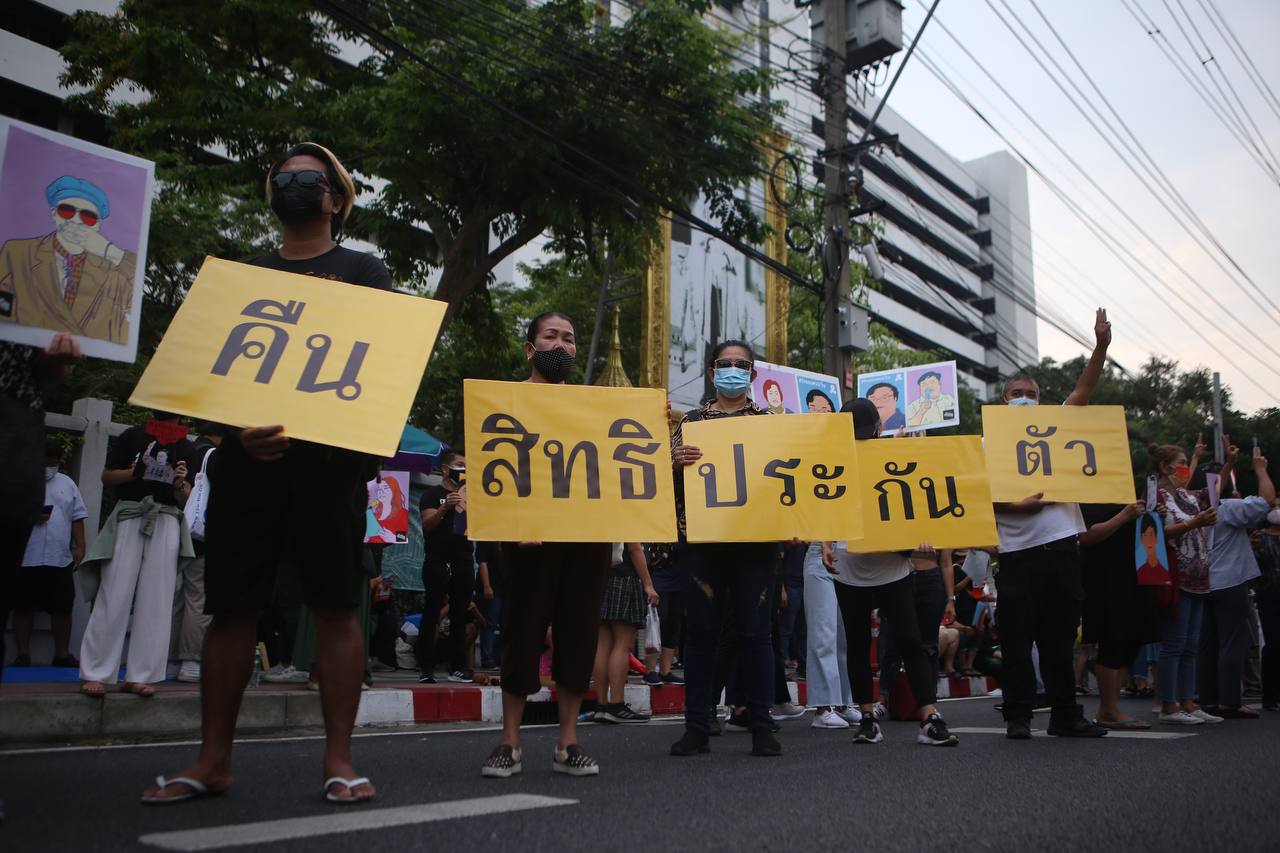 People gathered in front of Criminal Court on 30 April 2021 demanding the right to bail for political defendants.

According to TLHR, the Criminal Court plans to pursue contempt of court offence in at least 5 cases following the incidences in March-April including;

- By taking photo in the courtroom by Kruyai-Atthaphon, Bright-Shinnawat and Ford-Anurak, core members of the Khana Ratsadorn

- By organizing the “The Unjust King” activity in front of the Ratchada Criminal Court on 29 April 2021 led by members of the United Front of Thammasat and Demonstration and Ratsadon Nonthaburi.

- By organizing the “The Unjust King” activity in front of the Ratchada Criminal Court on 29 April 2021 led by members of the United Front of Thammasat and Demonstration and Ratsadon Nonthaburi. 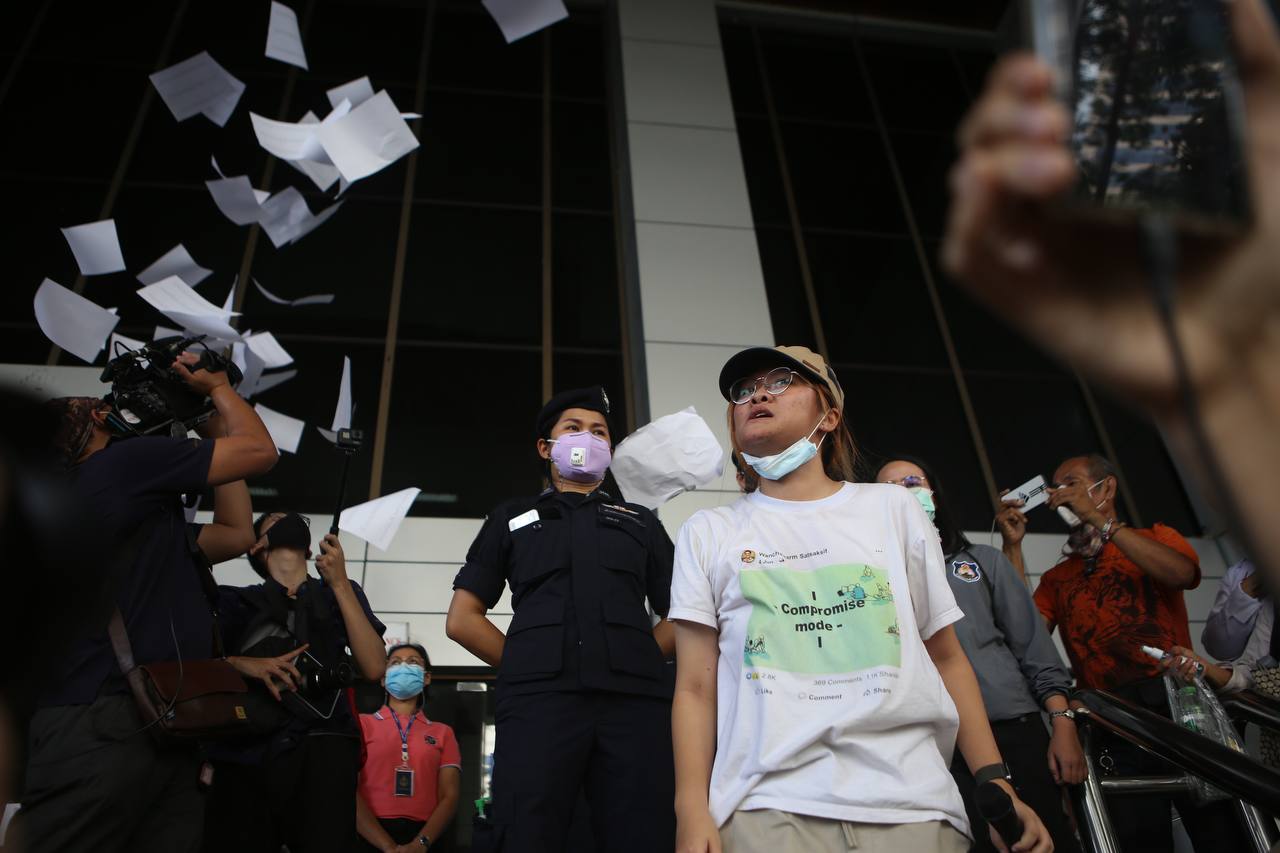 Activity on 29 April 2021 in front of the Ratchada Criminal Court led by members of the United Front of Thammasat and Demonstration demanding right to bail for political defendants. 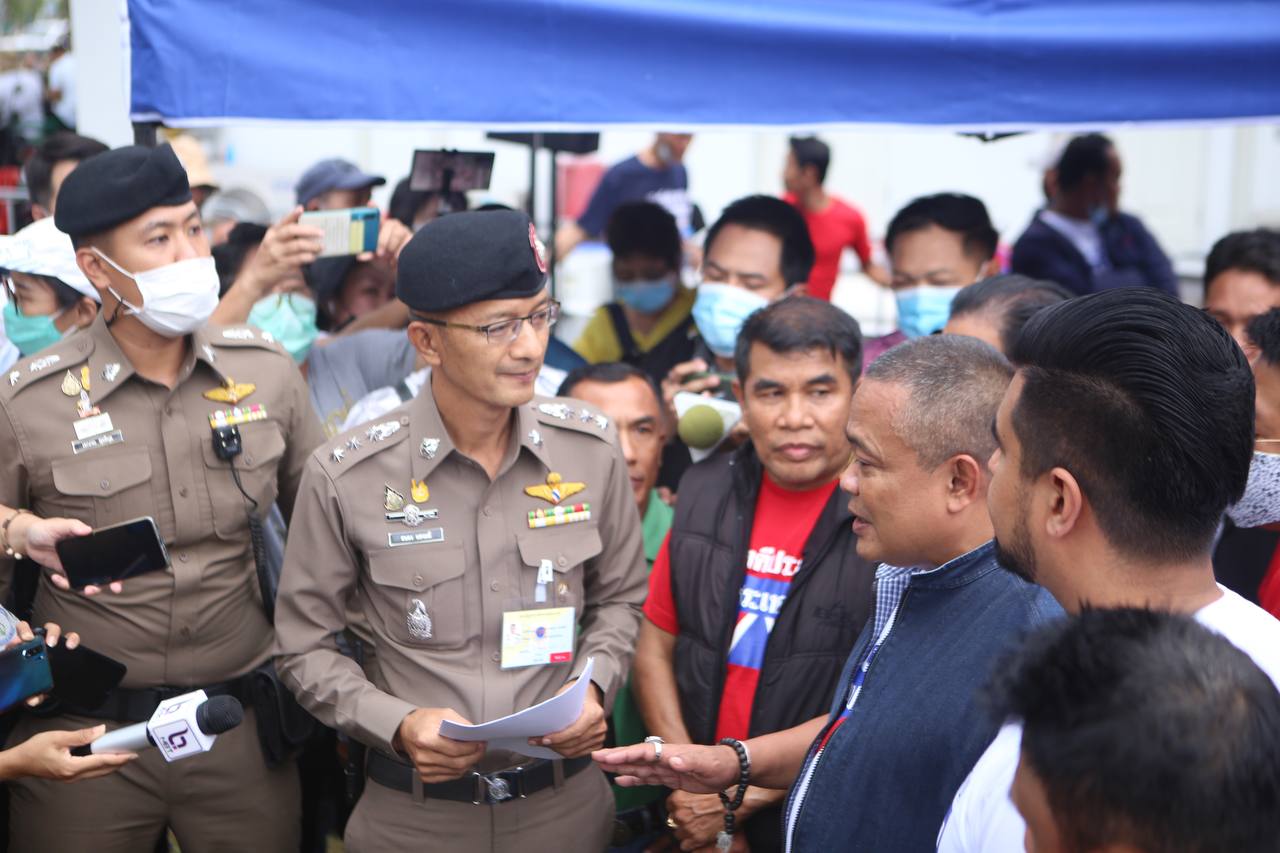 The Police clarified not allowing public gatherings because of the law relating to Emergency Decree on 4 April 2021"Thais Tolerate It No More, Thais Standing United for Thailand” event.

In addition to the Emergency Decree, the Communicable Disease Act and other laws issued for other purposes have been used to restrict the right to assembly including the Controlling Public Advertisement by Sound Amplifier Act, the Land Traffic Act and the Act on Maintenance of the Cleanliness which have constantly been enforced. During the exercise of freedom of expression and assembly in April, following the new surge of Covid-19 pandemic, the police would clearly intervene and read out more announcements to ban the demonstrations citing the area has been declared a red zone with strict control including in Bangkok.

According to TLHR, since 2020, at least 39 minors have been prosecuted for exercising their freedom of expression and assembly in 36 cases. In April, at least six children have been prosecuted for exercising their right to expression and assembly in two cases; The cases stem from an activity to offer 112 dishes of free food on 26 January 2021 at a Nakhon Skatepark in front of Plan Chai Lake, Roi-Et. Of the 12 activists, five are minors under 18 years. They have all been summoned to answer to charges including; Organizing a public assembly without prior notification pursuant to the Public Assembly Act’s Section 10, Unauthorized use of sound amplifier and violation of the Cleanliness Act.

The second case took place following the assembly on 2 May 2021 organized by REDEM in front of the Ratchada Criminal Court. After the assembly was ended around 18.30m the crowd control officials have cracked down on the remaining protesters and seized the area. Clashes have ensued and according to TLHR, four were put under arrest including one 16-year-old. They are accused in 6 criminal charges with possible imprisonment for 5 years. After having the arrest memo processed, the youth were brought for an arraignment at the Central Family and Juvenile Court which instructed that the arrest had been lawfully made and the alleged offenders shall be held remanded in custody. The legal counsel has thus applied for bail, and the court granted it, albeit since he faces multiple charges in this case, the surety was set at 10,000 baht.