# An overview of public assemblies in June 2021 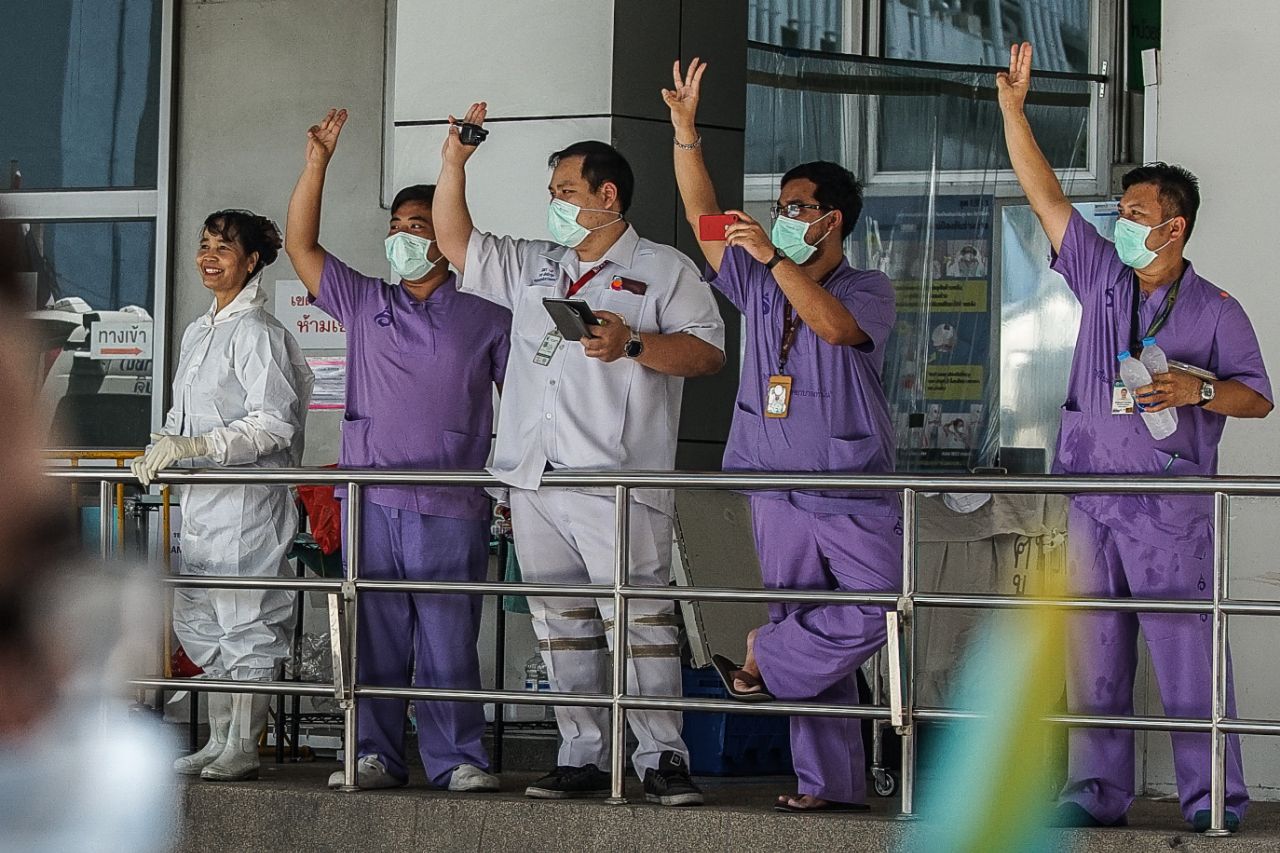 Thailand is currently contending with the continuous 3rd wave outbreak from April 2021 and is likely to enter the 4th wave due to the widespread virus Delta variant. The high rise in COVID-19 infections in Thailand has reflected the Thai government's inability to manage the spread of the virus and vaccine importation. This has allowed the rise of public demonstrations of people and civil society who are affected by governmental pandemic policies demanding governmental assistance and relief. In addition, the number of alleged people who voiced their opinions over the government or expressed their opinion both online and offline is intensely increasing since public health and national security become political issues.

In accordance to the observation and documentation of Amnesty International Thailand and iLAW via Mob Data project in June 2021:

Amid the third wave of COVID-19, the government has faced the challenges of responding to the situation with effective vaccines in hand and effective management and coordination with the public health system. This has resulted in the sharp increase of COVID-19 related cases in Thailand. Since April until June 2021, this wave has added up to nearly 350,000 confirmed cases in which the number of local infections has also toppled up 7,000 – 9,000 new cases per day during the end of June to early July resulting in a death toll almost reaching 3,000. As of July 11, the number of new infections reached 9,539, while the death toll recorded between 40-60 deaths per day in June and 60-80 deaths per day in the first week of July. The death toll hit a high record of 91 deaths on July 10.

The speed of inoculation is the key to create herd community and tackle the current situation. Thailand will reopen to visitors within 120 days with the plan to administer an average of 10 millions shots of vaccine each month and target to inoculate 105.5 million doses of vaccine for this year following Prime Minister Prayuth Chan-ocha announcement in nationally televised speech. In order to reach the goal, the average of vaccination per day is around 503,050 doses, in fact, the vaccination per day, regards to BBC report1 and Center for COVID-19 Situation Administration (CCSA) injection rate, is merely 93,753 doses. Together with, the delayed delivery of Astrazeneca vaccine, one of the main coronavirus vaccines to immunize herd immunity in Thailand, has increased the skeptical government’s COVID-19 response.

Furthermore, the third waves of COVID-19 has currently engulfed Thailand, CCSA imposed strict measures in 10 provinces as the Dark Red Zones for 14 days including Bangkok. The Thai government has issued preventive measures such as : curfew, travel restrictions between provinces, closure of public places, and prohibiting public activities (in which there is a gathering of more than five persons). The curfew requires the residents who are aside in such areas to remain at home from 21.00 -04.00. Restaurants and food stalls are complied with take away services. Entertainment venues are closed. The governmental measures have resulted in economic, social, and cultural drawbacks resultinhg in political backlash. In this month, various associations or groups of people express their opinions and call for the government to provide the support or relief packages as they are affected from COVID-19 outbreak. For example, in the early of June, Freedom Rider Union calls for the fair price to earn after the Ministry of Commerce has a policy to reduce the Gross Profit from the delivery Platform which effect directly to the income of Food Platform and the policy is launched without the labour opinion. Consequently, they had a campaign to stop working and also gathering in front of related agencies throughout Thailand. Apart from Freedom Rider Union, Labour Union, sex worker, Professional Association Public Taxi and Motorist and Thailand Nightlife and Entertainment Business Association also have an action to call for the relief from the government. 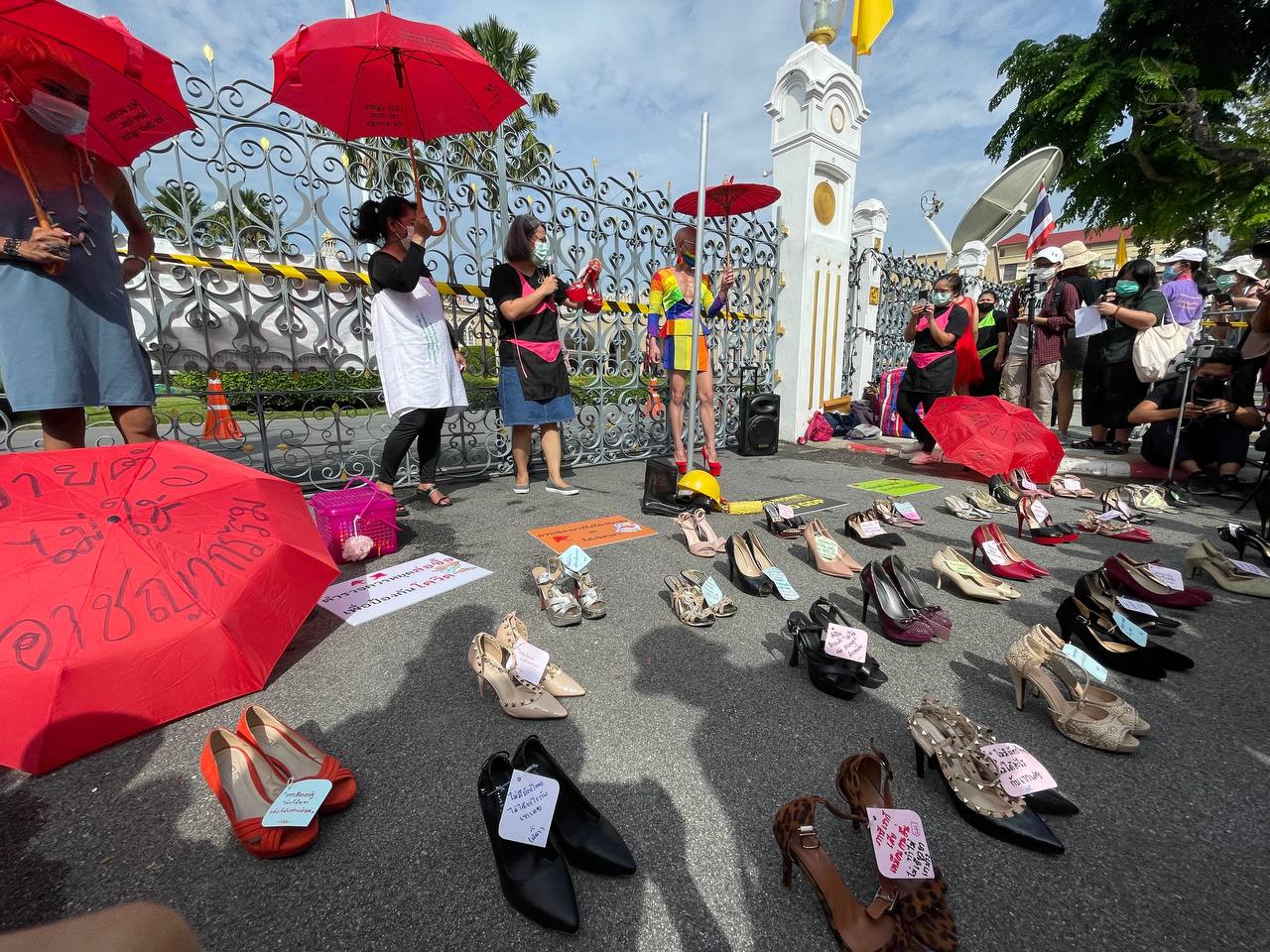 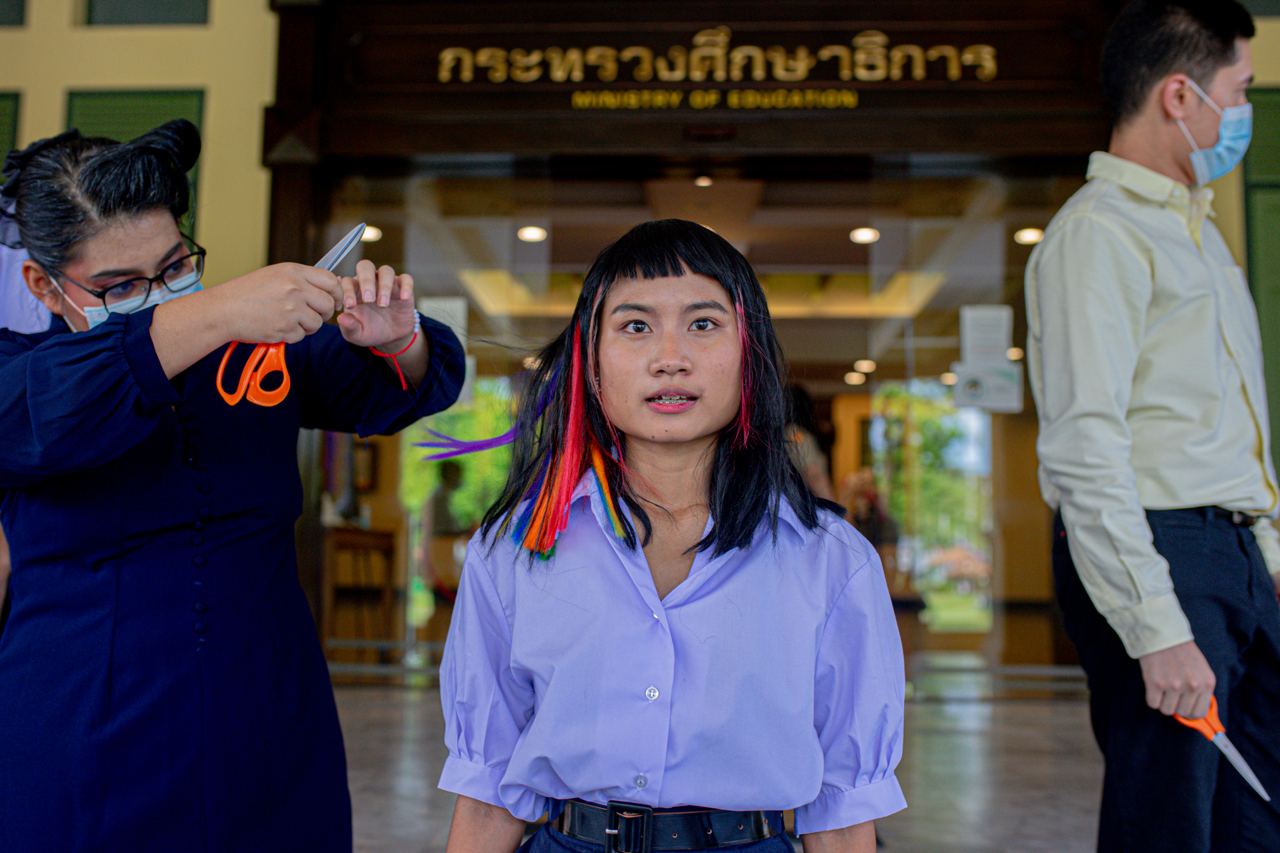 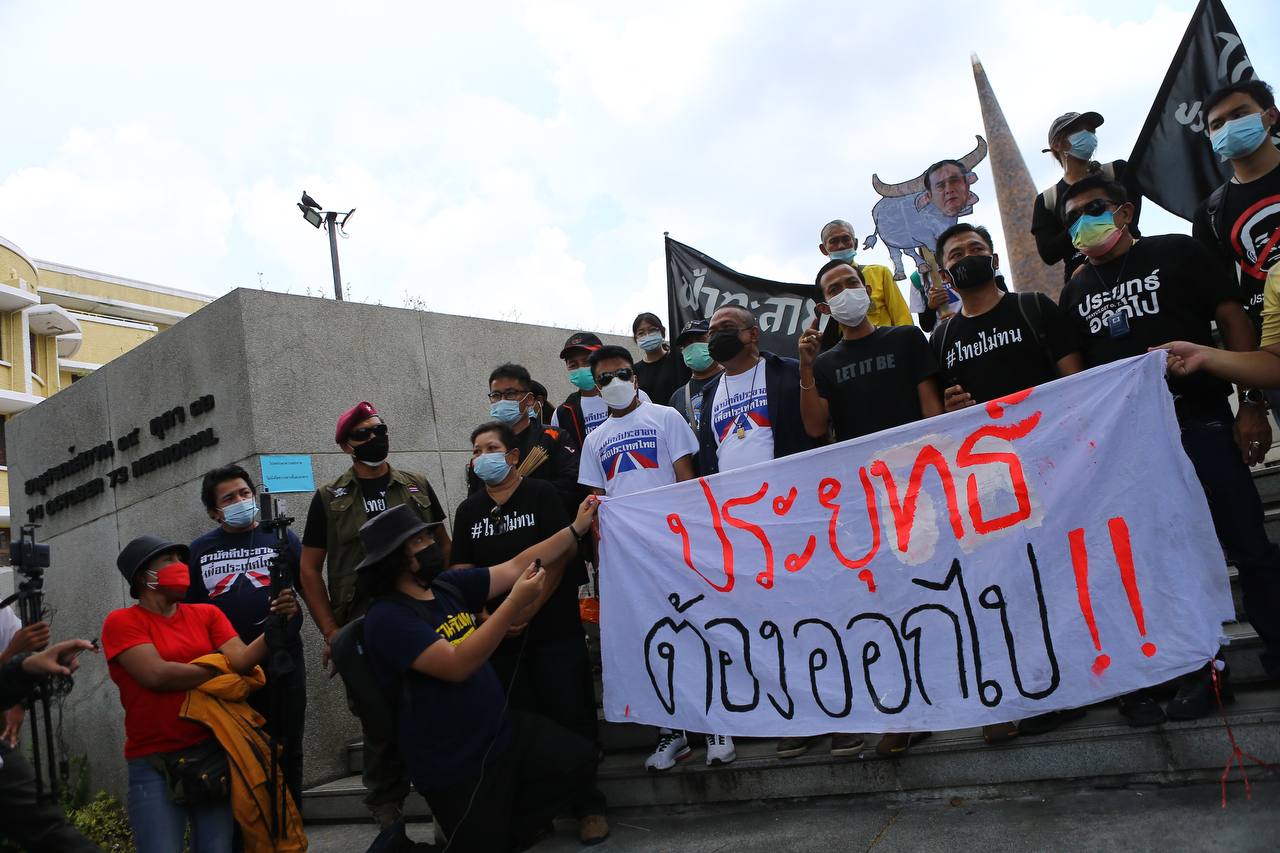 Along with the associations, the main groups of the pro-democracy include Ratsadon and Youth movement are active to address the issues that triggered from government together with three demands for reform; dissolution of government, new constitution and monarchy reform. Meanwhile, two main rallies that aim for ousting Prayuth government comprise of; 1 Impatient Thais or Thai Mai Thon led by political activist Jatuporn Prompan; and 2 “Thai People” led by Mr. Nitithorn Lumlua or Lawyer Nok Khao. 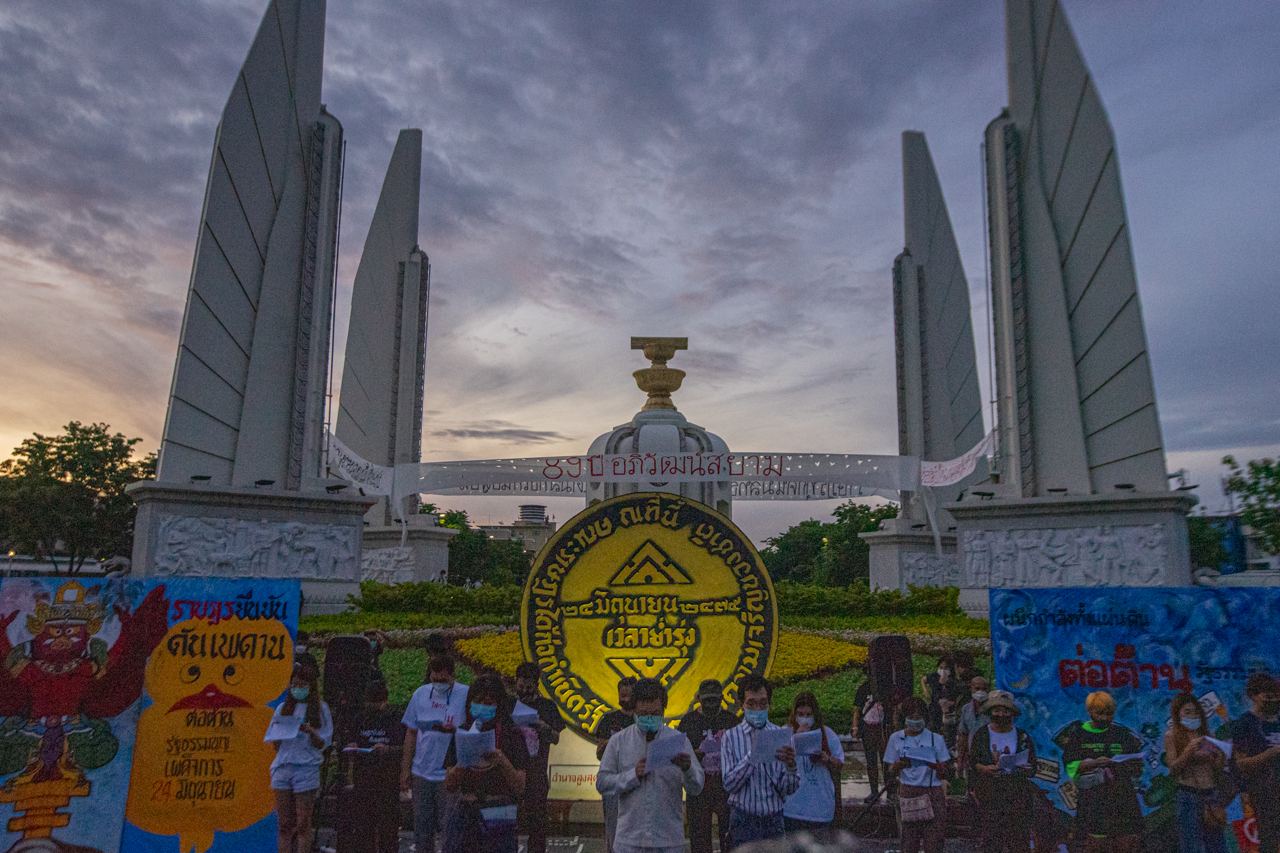 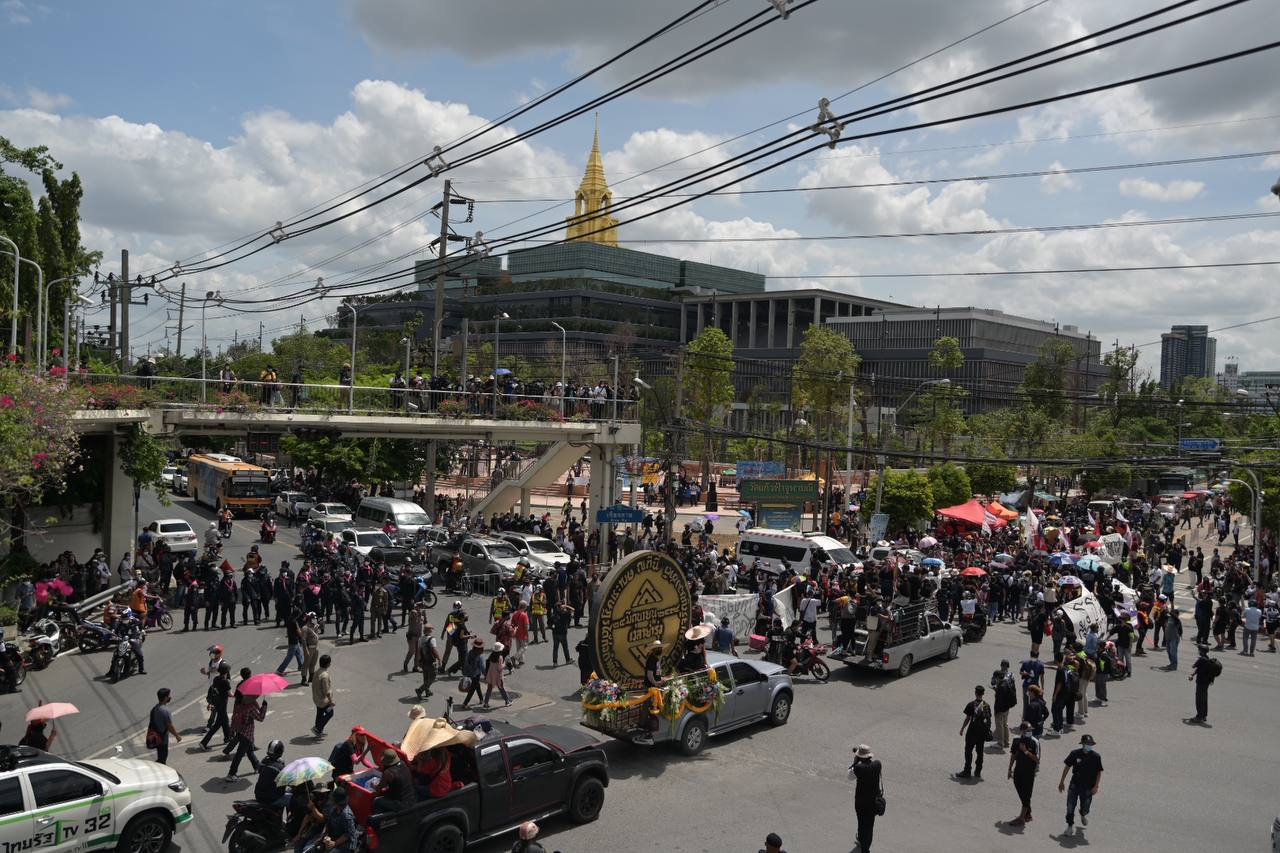 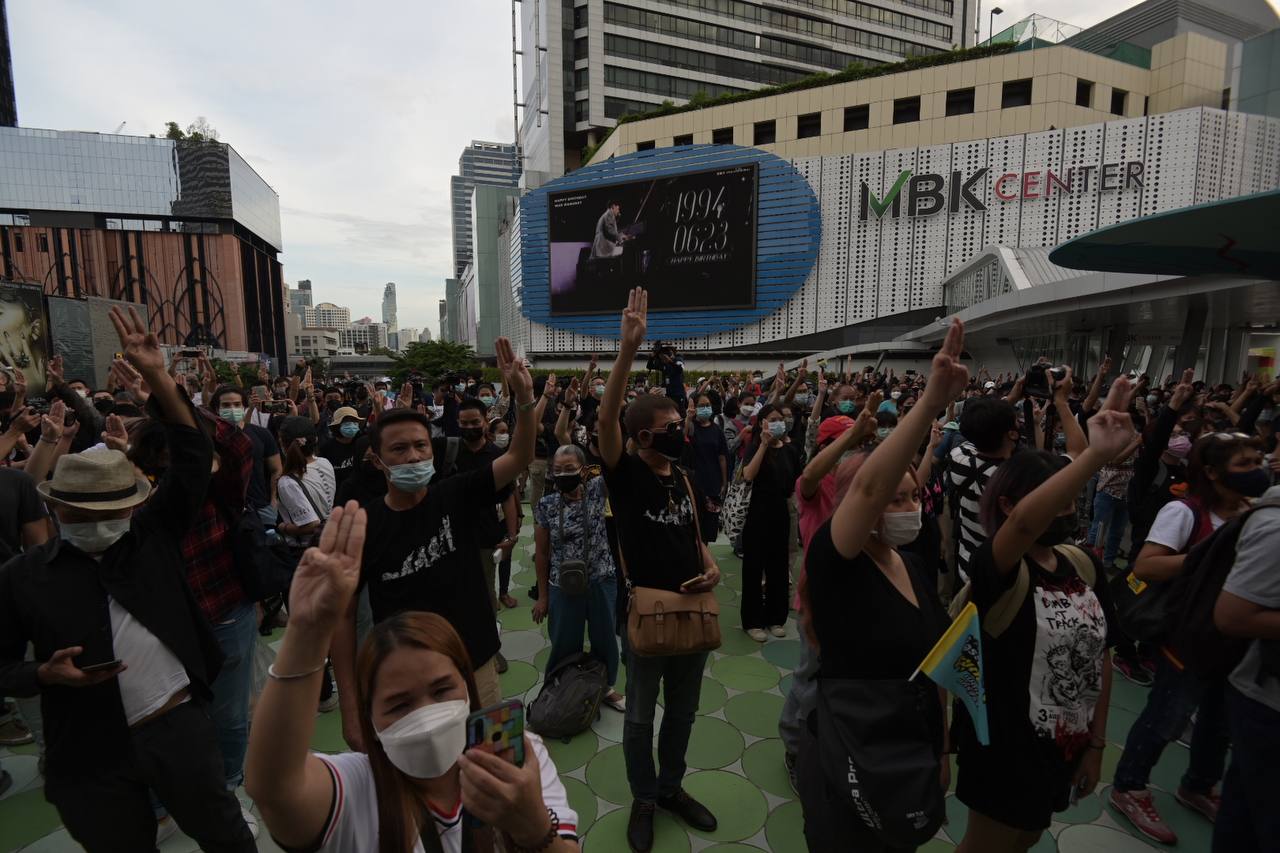 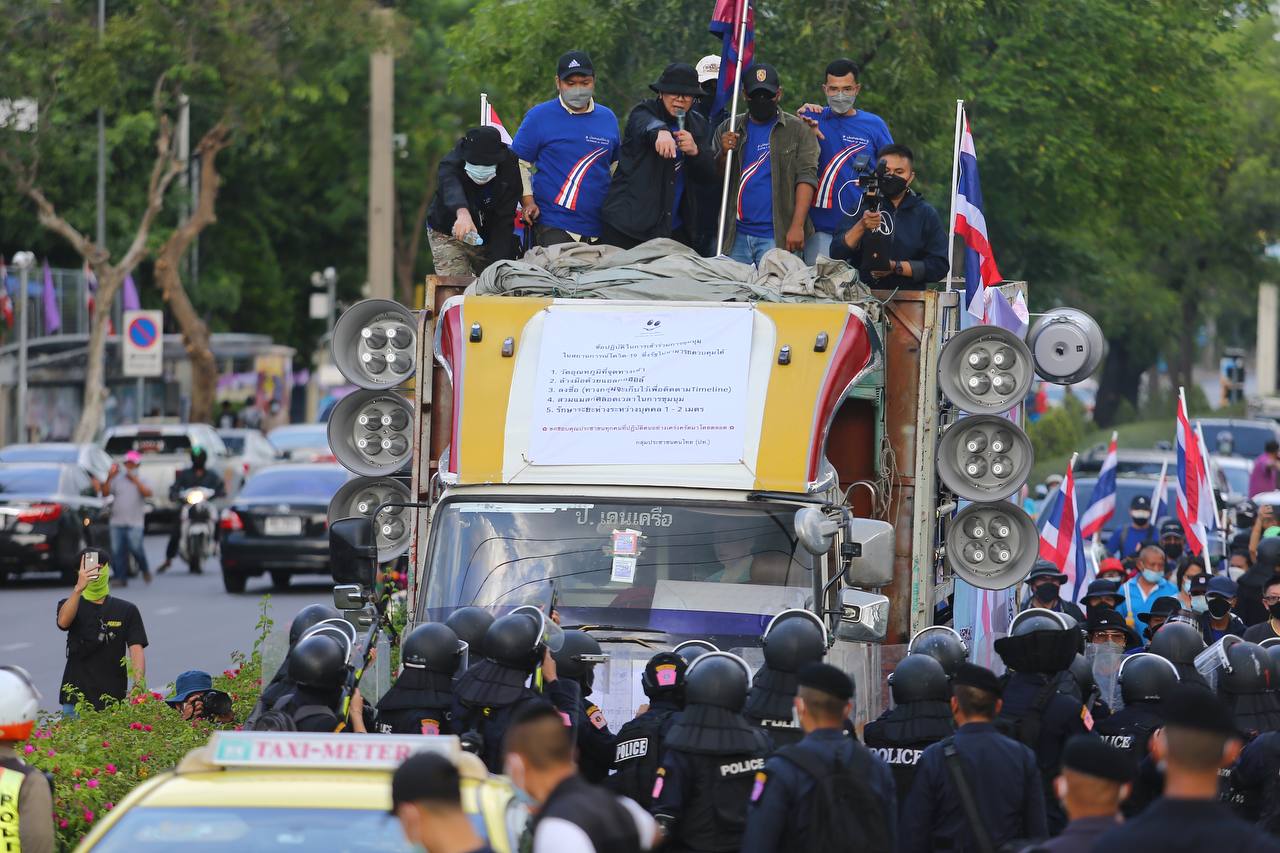 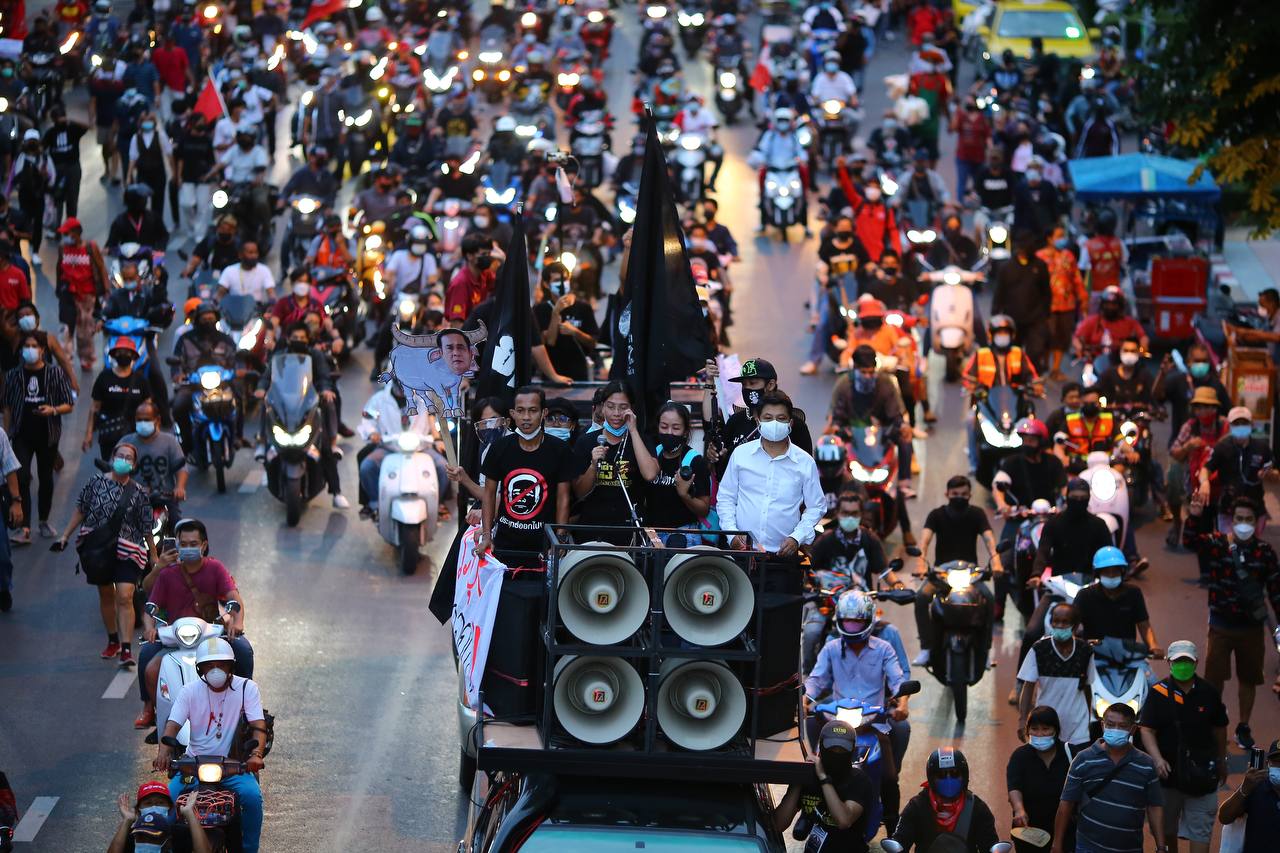 Despite the COVID-19 situation, the political situation has allowed the prosecution of the Ratsadon group leading to detention pending trial. From February to April, there was an increase in involvement in public gatherings, showing up in front of courts for the bail of political prisoners. In addition, leaders who have been detained, announced fasting to demand bail to fight the case. According to the Lawyers' Center, from the start of the July 2020 rally to the end of June 2021, the cases include; 18 individuals in 14 cases of the Civil Procedure Code, Sections 30 - 33, and 24 individuals in 4 cases of the section 198.

In June 2021, at least 8 cases are examined in trial and 3 out 8 cases have already verdicted. Two cases are from the public demonstrations on 29 April 2021 demanding the rights to bail for Ratsadon figures. Bright Chinnawat Chankrajang, leader of the Nonthaburi Youth group, is vindicated by First Trial Court with 4 months incarceration without parole. While Kradueng, Pisitkul, activist from Free Art group, is also vindicated and awaiting imposition of sentence. Apart from two activists, another four activists including Benja Apan, Natchanon Pairoj, Patarapong Noipang and Elia Fofi are also on trial.

Situation of the politicized use of legal procedures to suppress opponent’s opinion.

On 28th of June 2021, Facebook page named “Thailand Help Center for Cyberbullying Victims” (THCCV) and right-wing royalist activist, Songklod “Pukem” who told Reuters that he has him team of 80 volunteers to report the act of insulting monarchy. This report is published under the publically accessed user-generated map. The map features the name, location, occupation, and picture of alleged people with almost 100 people on the google map throughout Thailand.2 By 28th June 2021 in the afternoon, Google had taken down the map and mentioned that google considered that the content was violated the Google Map’s policies.

Thai Lawyers for Human Rights reported that, since the early of June 2021, at least 62 individuals including 3 youth have complained to TLHR that members of THCCV sent the personal information and threatened that the individuals will be prosecuted by section 112.

In the second week of July, Nangnoi Assawakittikorn, a chairman of THCCV, reported the name list of 1,275 individuals with the evidence from online platforms; Facebook, Twitter and TikTok for violating Article 112. This data was given to Pol.Gen. Sunattapong Niramitsupachet, Superintendent of TCSD.3 The Technology Crime Suppression Divison (TCSD) uses the data to investigate and prosecute cases of defamation under Article 112 of the Criminal code.