The Public Administration in Emergency Situations B.E. 2548 (2005) was still declared during 1 JUNE - 31 JULY 2022, the 19th extension of the declaration, and it was further renewed to extend the state of emergency to 1 August-30 September 2022, citing the re-emerging of the Covid-19 pandemic around the world and in Thailand. In addition, the Government Gazette published the Announcement of the Chief Officer in charge of the Resolution of the State of Emergency concerning National Security on the prohibition of activities and illegal assemblies which may likely help to spread the Covid-19 pandemic no. 15 (Announcement of the Chief Officer No. 15). In the Announcement, a prohibition of public assembly is put in place and procedure concerning the organization and notification of public assembly pursuant to the Public Assembly Act 2015 is imposed. Any violation of the provision can lead to a punishment prescribed in the Emergency Decree. Meanwhile**, there has been continuously increasing in the number of individuals prosecuted for violating the Emergency Decree despite recent absence of large-scale public assemblies. Since the youth-led movement in May 2020, 1,465 individuals have been charged for the violation of the law in 645 cases.** 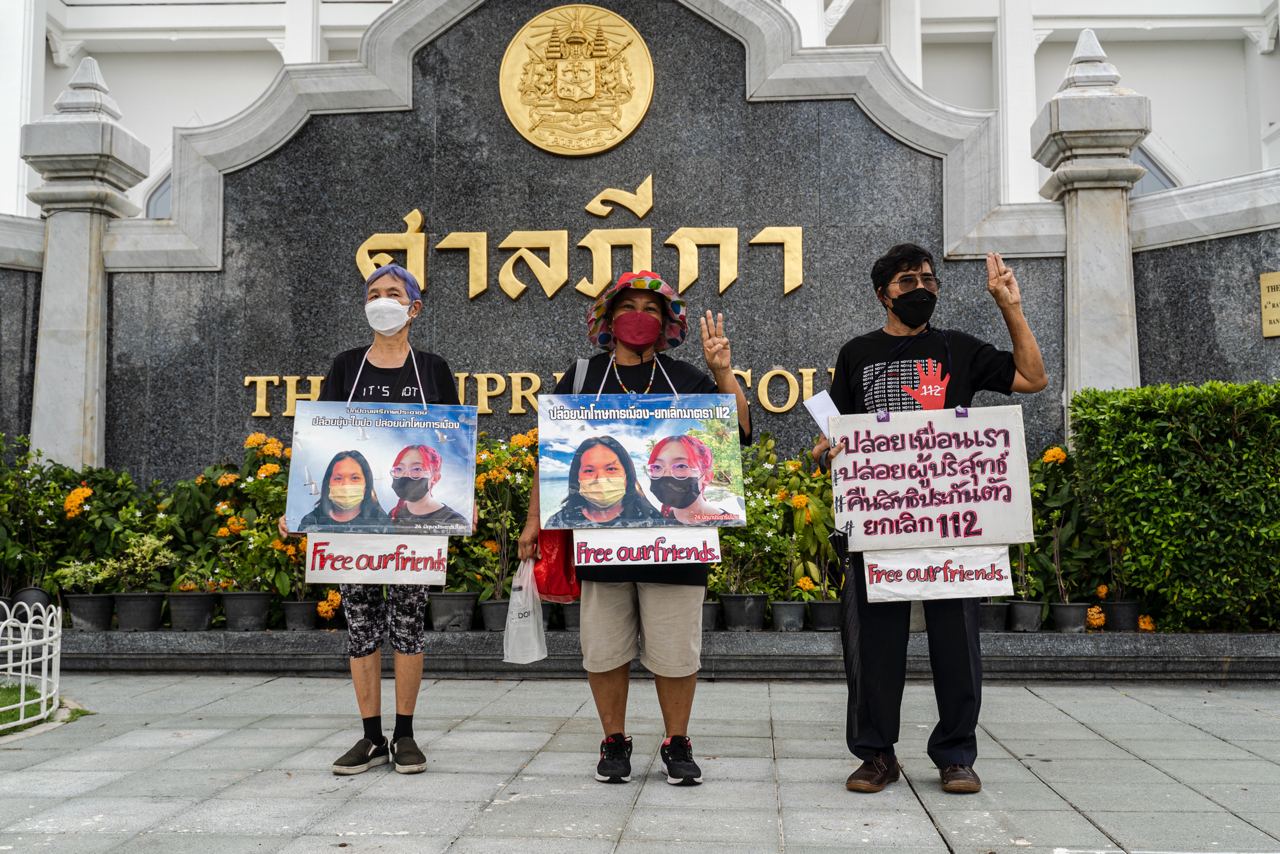 In July 2022, at least 94 public assemblies and expression have been organized throughout the country. At least 81 activities of symbolic expression have been organized to demand the right to bail of political activists who have been remanded in custody. On 27 July 2022, such activities were held throughout the country more than 24 times including Bangkok where they were organized by the Thalu Fah at Siam Square, by the 14 Warriors of Ratsadon at the Rajamangala Stadium, by the Thalu Gas Pithak Ratsadon at the Bangkok Remand Prison, etc. Other groups have been conducting the activity regularly including the Resistant Citizen which has held it for 81st time and the We, The People which has held it for the 14th week successively at Tha Phae Gate, Chiang Mai. Such activities were a direct response to this month’s soaring incarcerations of political activists in prison as nine more individuals have been denied bail related to the assemblies and hurling of paint color in front of the Democrat Party Headquarters on 30 July**. As a result, there are at least 30 individuals being remanded in custody.** Bung and Bai Por who were remanded in custody since 3 May and had been on hunger strike to demand their right to bail since 2 June were eventually allowed to post bail on 4 August. Altogether, they were incarcerated in prison for 94 days and were on hunger strike for 63 days or about two months.

Public assemblies have also been held to demand other issues including; 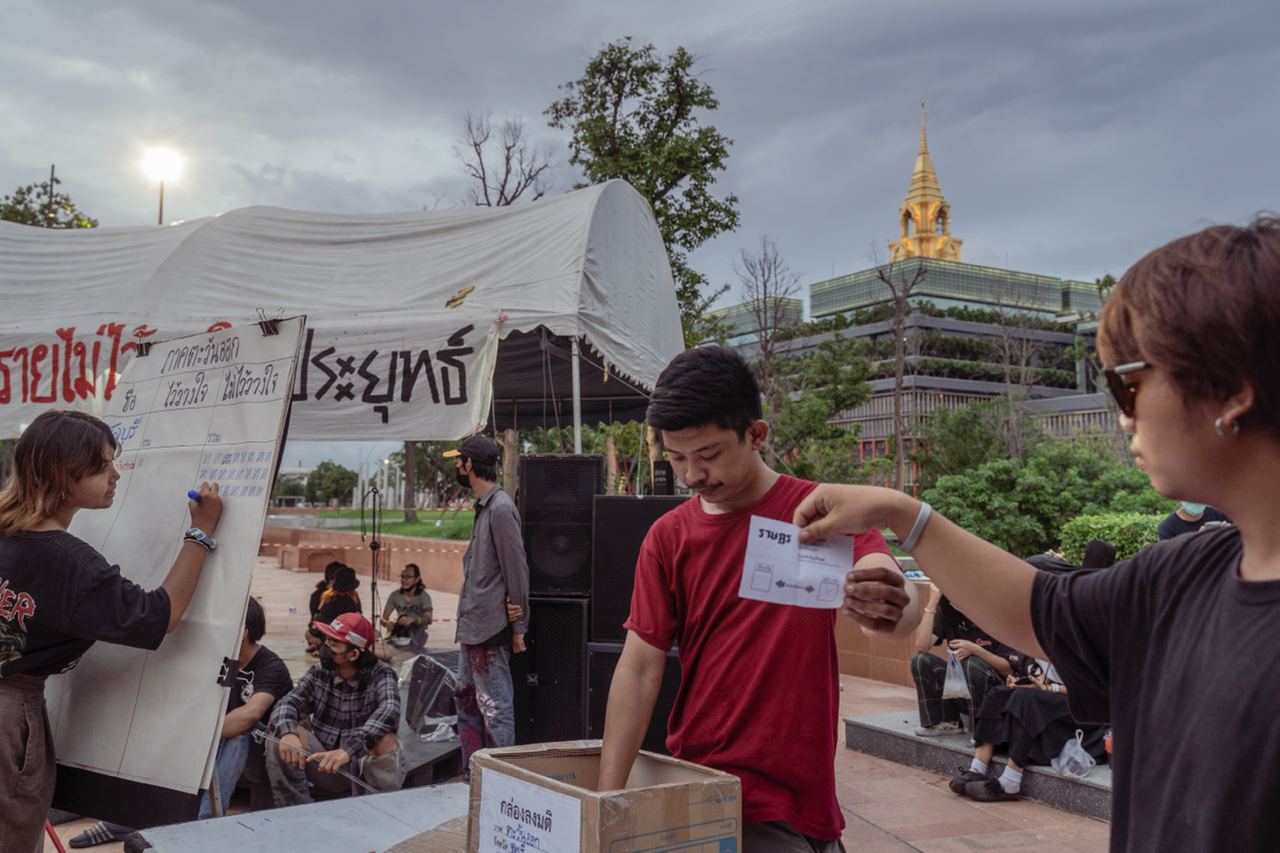 Demanding the resignation of the government, at least 3 organized by independent groups including Car Mob on 3 July and 12 July and sit-in and camping in front of the Parliament by Thalu Fah to monitor the no-confidence debate against the Prime Minister and the cabinet in the House of Representatives during 19-22 July

Demanding on economic issues, at least 2 including the demonstration to demand government’s response to address prices of gas and energy by the Group of Thai People or the Lom Ruam Prachachon Group led by Jatuphon Promphan and Nitiphon Lamlua on 3 July, the demonstration to submit a letter of petition to address unfair practice between the delivery service riders and ordinary motorcycle taxi by the Association of Motorcycle Taxi Drivers in Thailand on 27 July

Demanding on environmental issues, at least 2 including the sit-in protest led by the Save Nabon during 18-24 July to demand that the Ministry of Energy embarks on the Strategic Environmental Assessment (SEA) pursuant to the order of the Prime Minister 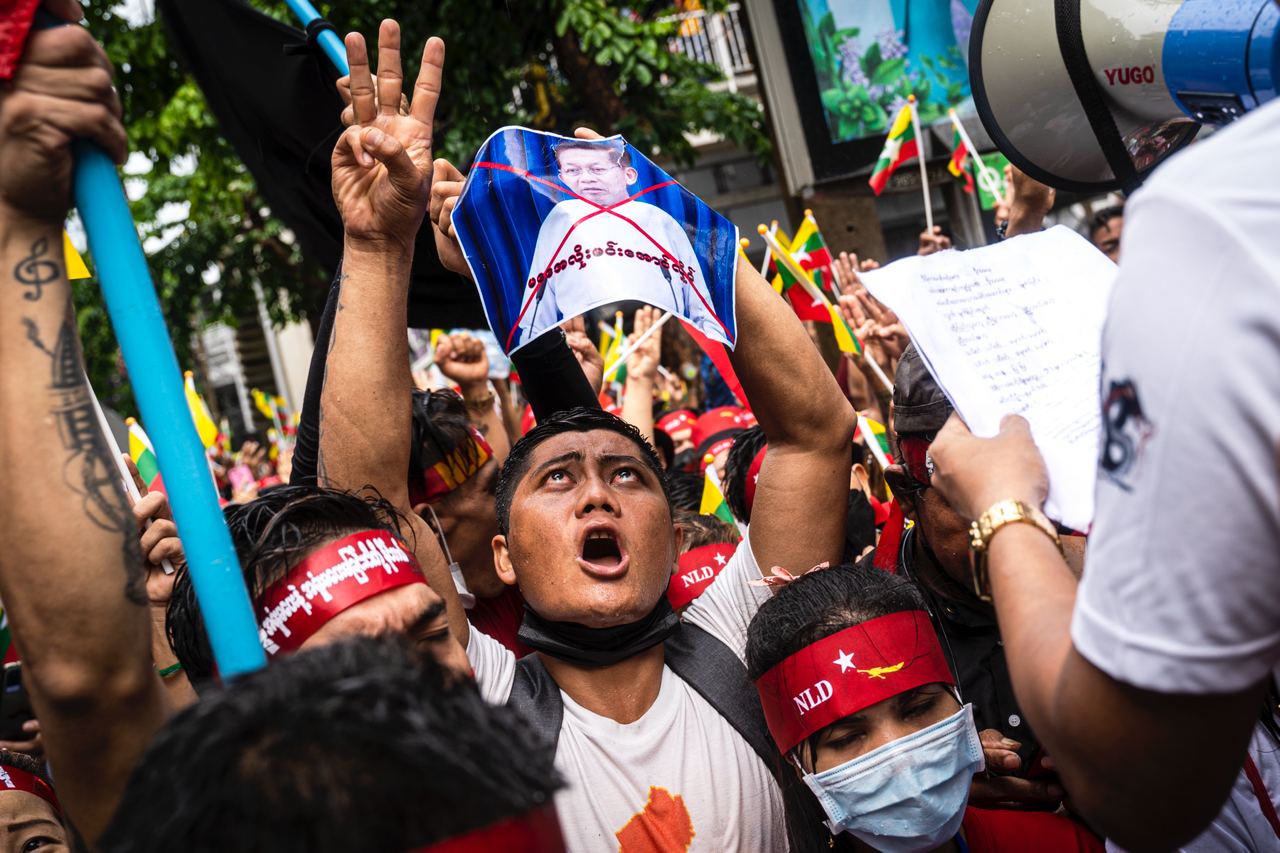 Other issues, at least 6 including the demonstration to demand respect of LGBTIQ+ rights during the Pride month in Khon Kaen and Chiang Mai’s Tha Phae and the demonstration against dictatorship in front of the Myanmar Embassy on 3 July

July saw few reports of harassment. This could be due to the arrests of eight activists of Thalu Fah who were later denied bail and have been remanded in custody. Meanwhile, Bung’s and Bai Por’s hunger strike took larger toll on their health. It warrants close attention from society. Nevertheless, there have been reports of various individuals being subject to harassment due to various reasons. The activities that drew the most harassment included the sit-in protest during the no-confidence debate and the Stand Stop Detention to demand right to bail throughout the country. All acts of harassment this month can be attributed to the public authorities.

Harassment during visits of VIPs

At least four staff members of the Move Forward Party reveal that investigation police have approached political activists and members of the Move Forward Party in various areas in Kamphaeng Phet and adjacent provinces to inquire if they were about to welcome or to complain anything during the visit of General Prayut Chan-ocha and his entourage or not.

Police and administrative officials followed and took picture of members of the People Against Sugar Mill Group in Esan during their visit to Kaset Sombun District, Chaiyaphum to document the violation of the right to public participation. On 17 July, activities were held in various places in conjunction with the censure debate. Police have, however, dismantled and removed the kiosks set up for people to case their vote to show if they have confidence in General Prayut Chan-ocha or not. At the Thao Suranari (Ya Mo) Monument, Nakhon Ratchasima, activists sustained injuries from a fall after being pushed down by municipal officers. They were also told by the police to remove their sign to mark the kiosk to cast the vote in front of the A Book With NO NAME Bookstore claiming its impropriety. In addition, Prakob, an activist from Nakhon Phanom Bearing It No More reveals how local police and police from Muang Police Station have called his daughter to ask about his movement even though he was not at home and was doing some business in another province. He has no idea how the police got a hold of his daughter’s phone number. It was perhaps related to Nakhon Phanom joining the Stand Stop Day of Action on 27 July. People in Khon Kaen participated in the Stand Stop Detention activity on that day, it was reported that the police forces from Muang Khon Kaen Police Station led by its Superintendent were deployed there to vet the activities, statements on the banners and outfits of the participants who were asked to wear another shirt on top of their shirt to demand the revocation of Section 112 and monarchy reform. But the people refused to comply.

Kanruthai “Eye” Klaion, a political activists, was subject to a house search by more than six plainclothes police officials who identified themselves as police detectives from the Lat Prao Police Station and executed the warrant to seize communication devices from her home and inquiring her about her bank book. In addition, she reveals that prior to that, she had received two letters to threaten her. In the two letters, a photo of her while participating in the protest are posted with captions to describe her possible charges and a mention of her ascendants that “Tell your daughter to behave, otherwise you will have to bring food to her in prison.”

Trend of harassment in August 2022

From our monitoring of the situation of public assemblies in each month, despite the symbolic actions drew a handful of attendants, police forces were heavily deployed to control and interrupt them. In many instances, the police even outnumbered the participants. Even though the public assemblies’ nature has not intensified, but the participants continued to constantly be subject to harassment including many activists who have been in the watchlists already. One of the most common forms of harassment was home surveillance and a breach of private spaces. Nevertheless, the number of individuals subject to harassment is only a lower estimate in August. If the rate of legal prosecution and incarceration of political activists remain the same, it is likely that more people will be subject to harassment by the authorities.

The political prosecutions continue to intensify. July saw an increase of individuals remanded in custody compared to last month. As to Section 112 cases, there have been new cases constantly. Also, it is necessary to watch the verdicts on many existing cases on trial. As to cases concerning the Emergency Decree, apart from the dismissals of cases and non-prosecution orders of others, several individuals have been charged retrospectively for a breach of public assembly prohibition in Din Daeng since 2021.

From the documentation of the Thai Lawyers for Human Rights (TLHR), since the Free Youth led public assemblies on 18 July 2020 until 31 July 2022, at least 1,843 individuals have been charged for participating in public assemblies or expressing their political opinions in 1,108 cases. Of this, 282 are youth under 18 years of age. In comparison to the numbers at the end of June 2022, 11 more individuals have been charged in 13 new cases (counting only those who have never been charged before.) Altogether, there have been at least 3,671 legal actions against the individuals although some of them are charged for multiple offences.

Detail of key offences can be described as follows;

Five more individuals in six cases have been accused of violation Section 112 this month. The total number includes 17 youth.

4. An offence against the Public Assembly Act, at least 107 suspects in 75 cases

5. An offence against the Computer Crimes Act, at least 140 suspects in 160 cases

Of 1,108 cases, 210 have reached their final verdicts, many of which were petty offences settled by paying fine to the police or the court. The public prosecutor also decided to not prosecute 21 cases.